Puppet Master X: Axis Rising leads on immediately from the events of the last film. However, being directed by Charles Band, it is not concerned with actually needing to have any of the same actors in the main roles, it feels ten times cheaper, and it ends by teasing a continuing storyline that some may wish was just dropped in favour of more standalone instalments.

Danny and Beth (this time played by Kip Canyon and Jean Louise O'Sullivan) are to be recognised for their act of heroism in defeating the Nazi plot from the previous movie. Meanwhile, a Kommandant Moebius (Scott Anthony King) is eagerly awaiting on successful results from a doctor (Oto Brezina) that he has put to work on developing human corpse versions of the puppets they have managed to get their hands on.

There are some fun ideas here, mainly thanks to the script by Shane Bitterling, but everything is undermined by the cost-cutting directorial style of Band. I cannot fully hate any movie that has a scheming, busty, blonde Nazi (Stephanie Sanditz) in the mix, and the third act has some fun new puppets added to the roster, but the rest is much tougher to get through than it should be. Aside from the central cast, about eight people, it's obvious that Band didn't want to pay anyone extra if he could help it. You can get away with that if you keep every scene small and intimate. It's a bit harder to do it if you're supposed to be shooting a dinner party sequence (as happens here).

The cast are all exactly as you'd expect them to be for the budget. There are two people who don't do a terrible job, Brezina and Sanditz, with one giving a decent performance and the other most effective because of the look and manner of her icy blonde character. Canyon and O'Sullivan are worse than the actors who portrayed their characters in the previous movie, King gives the kind of pantomime Nazi performance I thought went extinct after 'Allo 'Allo! ended, and Brad Potts, playing a Sergeant who reluctantly has to "babysit" the two leads, gives the worst performance in the film, despite some strong competition.

What else is there to say? If you've read all of that and still think you may enjoy the film then you MAY enjoy the film. It has enough little pleasures to avoid being too painful. It also has sets that feel like they were thrown together to give the maximum coverage for the lowest cost (the Band way),  the character arc for Danny is pretty ridiculous, and there's a Japanese puppet added to the cast that, well, you will just have to see it for yourself. Not to mention the poorly-shot puppet fights that make the strings all too visible.

Thankfully, it looks like the eighth movie will remain the absolute low point, but this is still far removed from the quality we had at the start of the series. And I am already afraid about what the next instalment will have in store for me.

There's a decent set here, for those who want the whole Axis saga. 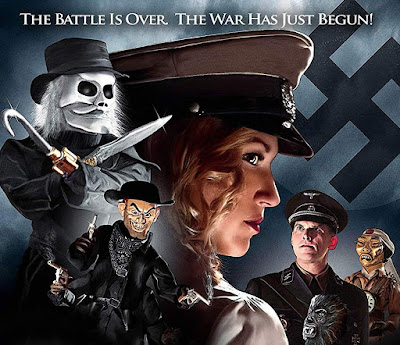