Be warned, there will be some minor spoilers in this review. I will say, however, that I will only mention elements shown in the trailer, while trying to avoid revealing anything major, although the film is predictable enough as it plays out that you'll always be a couple of steps ahead of it.

Vin Diesel is Ray Garrison, a typically Vin Diesel kind of guy. He's a skilled, tough, soldier who gets the job done and looks forward to returning to his wife (Talulah Riley) after every mission. But things take a sharp turn into disaster town when Ray and his wife are caught by a group of extreme villains, and both are killed. And that's when the plot really begins. Ray wakes up, confused. It turns out that he's been brought back to life by Dr. Emil Harting (Guy Pearce), and he's been given a substantial upgrade. He is stronger, and any injuries are swiftly repaired by nano-technology. The first chance he gets, Ray heads off to find those who killed his wife. But is he after the right people? And why does he wake up in the same confused state, being treated the very same way, once he thinks he has completed his objective? All is very much not as it seems.

Bloodshot is a typical feature debut from someone who has spent years working on the visual effects of various projects, and that is exactly the background we have for Dave Wilson (billed as David F. Wilson). The only other thing directed by him is the excellent , and visually stunning, "Sonnie's Edge" episode of Love, Death & Robots. The visuals here aren't bad, but they're not good enough to make up for the weaker elements of the film, and there are too many weaker elements.

First of all, Vin gotta Vin. I don't know why he always has to be the best in the room, but we know that he does. So you know how this story is going to play out from the very beginning, even as it tries to squirm and swerve around various plot turns. Eiza González does okay in the lead female role, KT, and Pearce is a good presence as the scientist who obviously has a nefarious agenda, but everyone else is either forgettable (Sam Heughan plays Jimmy Dalton, a potential antagonist with nothing to make him stand out, aside from the special effects) or underused (Toby Kebbell). At least Lamorne Morris livens up the proceedings, playing a computer programmer who may be able to help Vin if he is allowed to live long enough.

Although I am unfamiliar with the comic book that this is based on, I can only hope it isn't as dull as this. The script, by Jeff Wadlow and Eric Heisserer (the latter has the better overall filmography, but also helped to give us the remake of A Nightmare On Elm Street), feels like it is 50% exposition, 25% the usual ego-stroking that Vin Diesel needs, and 25% decent set-pieces. That's not a recipe for success.

As long as you don't expect greatness, there's just enough here to entertain. It might make the second part of a good double-bill for the few people who also somehow enjoyed Babylon A. D. Everyone else should keep bumping it lower on any list of planned viewings. 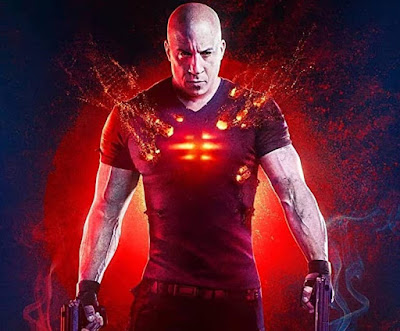