Ran is based on Shakespeare's King Lear (something I will have to take on good authority from others, having not yet read the play for myself). It's also a film that some claim is the best to come from legendary director Akira Kurosawa. I have to dispute that. Personally, I prefer both Seven Samurai and Throne Of Blood, but that's not to denigrate Ran in any way. It merely illustrates just how often Kurosawa was working at the peak of his powers.

The main story concerns an elderly warlord named Hidetora and the divide that he causes between his three sons, Taro, Jiro, and Saburo. He starts the movie by trying to teach them the importance of staying strong together, something that one of the sons immediately protests. There will always be the potential for forces to be broken, whether individually or together. The rest of the movie quickly ends up proving Saburo correct, for it was he rejecting the main lesson. There's scheming, treachery, insanity, and armed skirmishes on the way to a suitably grandiose finale.

Co-written by Kurosawa, working with Hideo Oguni and Masato Ide, Ran is an impressive and epic experience that really layers everything over a very simple message at its core (often the case with Shakespeare plays). There's a power struggle between a few different characters, but also an inevitable feeling of the sins of a father being passed on to his sons, despite his best efforts.

Tatsuya Nakadai is excellent as the old man who has been tired out from a life of warmongering and aggression, and the younger cast members all do great work as his three sons, with Daisuke Ryû a bit of a standout as the son rejected by his father while he tries to explain how things are likely to go wrong in the time ahead. The other standout is Mieko Harada as Lady Kaede, a manipulative woman who encourages her husband to go to any lengths to get more and more power, but I should also mention the jester character, Kyoami, played by Pîtâ, someone who loses their sense of silliness in the face of a constant barrage of strange unpleasantness and horrors.

As accomplished as he is at showing things on a grand scale, it's still impressive to see some of the spectacle Kurosawa puts on display here, especially in a final act that culminates with various forces about to face off against one another. And yet it's also these moments that show how this movie doesn't work quite as well as some of the other Kurosawa classics, which tended to, for me, better share out the moments of epic scope with the smaller character beats. Ran still does that, but it doesn't work as well for me here as it did in the other movies mentioned above.

I'm not an idiot though, this is still a near-perfect bit of cinema. And it's essential viewing. 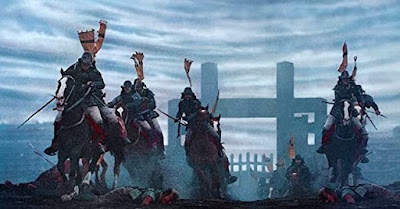