As Disney continues to remake/repackage their hits to make more money off them, I end up eventually giving in and watching them. All while wondering how bad things can get. Aladdin is arguably the most egregious example yet of the Disney approach of eating their own tail for the sake of the almighty dollar.

Strangely enough, I was surprised by how much I enjoyed The Jungle Book, mainly because it had familiarity to it without slavishly copying every moment from the animated original (which is a firm favourite of mine). I also enjoyed Dumbo more than many others. I didn't LOVE it, but I didn't hate it, as expected. It was never going to equal the original, but it had a good cast and some nice moments. I've not watched most of the others yet, and I won't take up time and space here to once again rant about why The Lion King is not a live-action remake.

And here's Aladdin, a film I had avoided for some time. The original was, as far as I recall, the film that gave Disney a shot in the arm, and also showed a-list stars who good a career move it could be to get involved with something animated (Robin Williams being the scene-stealing genie). So, despite them already remaking some big names, this always felt like a bigger risk.

And it is absolutely terrible. Terrible. It's one of the worst mainstream blockbusters I have seen in the past decade.

The story is exactly the same. You have Aladdin (Mena Massoud), a streetwise lad who survives thanks to his wit and fast hands, and in some of the early scenes he meets an incognito Princess Jasmine (Naomi Scott). Aladdin then ends up in possession of a magical lamp that houses a genie (Will Smith), using it to make him into a prince, much to the suspicion of the cunning Jafar (Marwan Kenzari), the advisor to the Sultan with designs on his own path to ultimate power.

There are a few things that work here. A magic carpet being one, a monkey being the other, and the winning performances of Scott and Nasim Pedrad (playing Dalia, the handmaiden, I guess you could say, to Princess Jasmine). That's about it.

Smith tries hard in the role of the genie, it's just a shame that they kept laying CGI over him, even during some of the smaller moments where it wasn't needed. And, with no offence intended to him, he's just no Robin Williams. Williams brought a manic energy and bottled lunacy to the role that I can't imagine anyone else equalling, and Smith doesn't come close.

He's better than some of the other cast members though. Massoud is about as bland as can be, and Kenzari is terrible in the role of Jafar, not once feeling like a threat until it is required for the last 20 minutes or so.

The direction from Guy Ritchie is probably his worst work to date, which didn't stop this from being a massive financial success, and crediting the script to both him and John August seems to imply enough diversion from the original screenplay that isn't there. You get a different framing device for the main tale, that's about it. The rest is almost exactly as you remember it from the original movie, except not half as good.

If you ever manage to find a magic lamp with a genie in it, just give me one of your wishes, please. And I can wish that I'd never wasted my time on this.

I also wish for coffee sometimes. 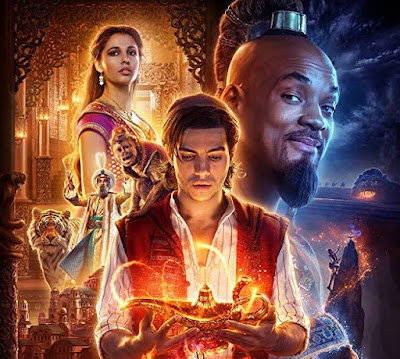