Ah Hellgate. If it was a human being, Hellgate would be the one friend you like visiting occasionally, getting too drunk with, being bored by the same conversations you have had many times before, and then ending the night in bouts of laughter as they proceed to engage in the kind of shenanigans that remind you of what a mad bastard they really are. It's as wonderful as it is painful, and arguably came out at the wrong time to be anything more than the kind of joyous mess that only curio-seeking horror fans ever really embrace.

Part of me doesn't even want to summarise the plot. Not because the film isn't worth my time, but because I can't ever do justice to it. I guess I should try though. It all starts with a group of bikers snatching a young woman, much to the dismay of both her and her father. It all ends in tragedy. Never fear though, because years later a random old fella finds a crystal that he discovers, after an encounter with a very rubbery bat, can bring the dead back to life. This means a father can bring his daughter back to life, and a number of other characters can get themselves mixed up in the macabre madness.

The second film written by Michael O'Rourke, Hellgate benefits from the way in which the script consistently sets out to entertain, no matter how silly it all gets (you even get one scene in which a number of people just make puns as they look at a local cemetery). It also benefits from the direction from William A. Levey, a man who began his directorial career with the dubious magnificence of Blackenstein (one I have yet to see, but I have now been reminded that I NEED to see it).

The cast are about as disposable as they come, but everyone does what is asked of them, whether that's being near-unbearable while acting as a nominal lead (Ron Palillo in the role of Matt) or being slightly ethereal and ready to get naked at the drop of a hat (Abigail Wolcott in the role of Josie, the resurrected young woman). Carel Trichardt delivers a . . . unique performance as Lucas, the father who brings his daughter back to our mortal coil, but both Petrea Curran and Joanne Warde are appealing in their supporting roles. Evan J. Klisser is a bit irritating, and Frank Notaro and Lance Vaughan play bikers named, respecvtively, Buzz and Zonk. Yes . . . this film features a biker named Zonk! It's also worth mentioning the wonderfully over-the-top turn from Kimberleigh Stark, playing a waitress who isn't coy about letting customers know if she takes a liking to them.

The special effects throughout aren't very special, although you get one or two good shots making use of some bladder work, and there's absolutely no tension at any point. That isn't so bad though, because the film is so eager to please that it's impossible to resent, or just outright hate. Despite an uneven first half, which makes the mistake of trying to provide a grounding for the events before settling in to just throwing anything onscreen that seems spooky and entertaining, Hellgate overcomes the odds to become something oddly lovable. I wouldn't call it any kind of lost classic, and it's a shame that it didn't lean even further into the insanity, while also throwing around more effects of varying quality and lots more blood, but it's an amusing way to pass 90 minutes. 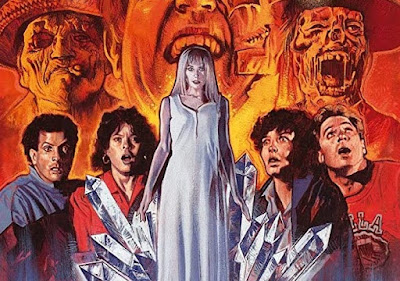