Written and directed by David Gordon Green, based on an earlier film by Hafsteinn Gunnar Sigur∂sson (and, yes, it took me a good ten minutes to figure out how to type that out on my standard keyboard), Prince Avalanche is very much in line with a number of his other low-key comedy dramas, especially his earlier works.

Paul Rudd is Alvin, a road worker who is painting yellow lines and placing roadside posts with Lance (Emile Hirsch), a young man who is also the brother of his girlfriend. These two individuals in the middle of nowhere find the isolation affecting them in different ways. Alvin likes the peace, Lance misses some of the relative hustle and bustle of small-town life. Their time is occasionally interrupted by a local truck driver (Lance LeGault), and Alvin also has an encounter with a woman (Joyce Payne) who shares a sad tale of loss that helps to underline what is worth holding dear in life.

Your enjoyment of Prince Avalanche will depend on a couple of main factors. First of all, how you feel about Rudd and Hirsch in the lead roles. I don't know of anyone who dislikes Rudd (and if anyone reading this hates the man then I just don't understand how you go through life with such darkness in your soul), but Hirsch has definitely lost a bit of goodwill over the years. I've always liked him onscreen though, even if he's rarely the best choice for any role, and he works well here, often annoying Rudd by doing nothing more than being a standard "kid" who struggles with what could be meditative time in nature.

The other main factor here is the direction from Green. After three comedies that were more brash and broad than his usual style, Prince Avalanche feels very much like an attempt to ground himself once more, to prove that he could go back to the quieter, more naturalistic, style of film-making that brought him to the attention of film fans at the turn of the century. It works, but I am sure it would be a bit disappointing to anyone hoping that they would be getting more stoner gags and silliness.

All of the main performances are very good, with the bulk of the runtime seeing the film carried by Rudd and Hirsch. LeGault and Payne may not have much screentime, but the script, and their performances, allows them to provide another angle of reflection for the leads. The same goes for the main work being done, the painting of the yellow lines and the other work making a quiet road into a safer route to travel. It's monotonous, quite thankless, and ultimately quite important to those who will get the benefit of it. Much like many other tasks in life.

Although the characters spend some time walking around, journeying through the quiet landscape around them, this could easily have been a stage play, and that's perhaps the best way to view it. It's a two-hander, for the most part, with a background of trees, quiet road, and lives temporarily left behind that will need to be faced up to again in the near future. 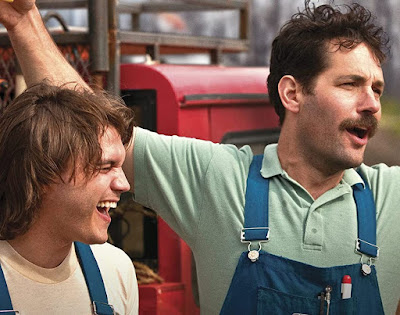