Get Duked! enjoyed a good festival run last year, if my memory serves me right, but I didn't catch it. It was then titled Boyz In The Wood (which I think is a better title) and I just didn't fit it into my schedule when it was a potential viewing choice back then. I'm glad I finally got to it now though.

Rian Gordon, Lewis Gribben, and Viraj Juneja are, respectively, Dean, Duncan, and legend-in-his-own-lunchtime DJ Beatroot. They're all in a bit of trouble, which leads to them being signed up to the Duke of Edinburgh Award scheme. They'll be dropped into an area of Scottish countryside and left to make their own way to a pre-determined point, with a number of factors being rated during their experience. One of those factors is teamwork, which looks a lot less likely when they're joined by Ian (Samuel Bottomley), an eager young man who actually volunteered for the scheme. In fact, getting to their destination at all starts to look very unlikely when the teens start to be hunted by a gun-toting "duke" (Eddie Izzard) and his wife (Georgie Glen).

Written and directed by Ninian Doff, Get Duked! is a fantastic feature debut from someone I'll now be eager to see more from. Doff has built up a decent selection of music videos in his filmography, having worked with the likes of The Chemical Brothers, Kasabian, Miike Snow, and Run The Jewels, and he delivers a film that crackles with energy, genuinely great humour, a smattering of hip-hop, and class warfare.

Funnily enough, as light and disposable as the film may seem, in some ways, it's that last element that separates this from many other riffs on The Most Dangerous Game. The people doing the hunting here are the ones we have seen in the news more and more lately, usually for all the wrong reasons. People that have everything they want, take whatever else they fancy, and don't think the rules apply to them. They're not breaking the law. They're helping to maintain a natural order.

The script is sharp and witty (there's a monologue here from a scene-stealing Alice Lowe, talking about a bread thief, that is one of the funniest things I have enjoyed in years), the soundtrack is very enjoyable, and the very end scenes bring everything together in a way that is both ridiculous and yet also absolutely satisfying, and bound to make you smile.

It also helps that every single cast member is doing top work. The young leads are about as perfect as you could want them to be. Gordon and Gribben are very standard . . . idiots (certainly in how quick they are to just try whatever idea first comes into their heads), Juneja keeps having an opinion of himself that doesn't seem in line with his rapping abilities, until he discovers an unlikely fan base, and Bottomley is the kind of young man you just know has a favourite Thermos flask. Izzard and Glen are suitably menacing as they stalk their prey, more so in the way they really don't seem to try and hide their homicidal intent, and Jonathan Aris is the teacher responsible for dropping the teens off and leaving them to their own devices. You also get some Highland police officers (the two main ones played by Kate Dickie and Kevin Guthrie), their quest for the aforementioned bread thief nicely juxtaposed with a more dangerous potential threat, and a farmer (James Cosmo) who ends up being gifted a DJ Beatroot CD. Cosmo has given many great performances over the years, but the sight/sound of him driving his tractor while singing along to some juvenile penis-centric lines of rap should be high on any list of favourite Cosmo moments.

This would double-bill nicely with Attack The Block if you want to see both urban and rural adventures of youths being hunted by dangerous predators. I'd argue that the enemy here is much more dangerous than any alien entity. And I'd also argue that this is the better of the two films, but there's not much in it, and let's revel in the fact that the past decade gave us both. 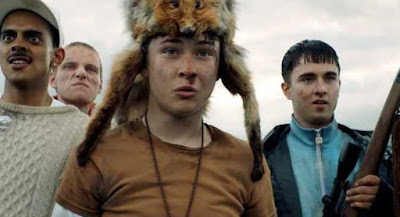