Written and directed by Aki Kaurismäki, Lights In The Dusk is a very interesting crime drama that takes some familiar tropes and delivers them in a strangely stilted and sedate manner that shouldn't really work, but does. I must admit that the first few scenes left me feeling slightly cold and confused, but sticking with it led me to enjoy something impressively unique and worthwhile.

Koistinen (Janne Hytiäinen) is a lonely nightwatchman, hoping to one day start his own business. He is friends with Aila (Maria Heiskanen), a woman who works in a food van, but doesn't seem to have anyone else in his life. This looks set to change when he is approached by the lovely Mirja (Maria Järvenhelmi), a beautiful woman who screams icy femme fatale from her very first appearance. It turns out that Mirja is in the employ of a crime boss (Lindholm, played by Ilkka Koivula) who wants her to gain information from Koistinen and rob his place of work.

Although superficially very simple, almost laughably so when you think of how the lead character accepts everything around him, Kaurismäki seems to be very deliberately utilising the familiar to underline a message. It happens all the time, to varying degrees. People can see others around them about to cause harm, or just use them, and yet they still go along with it all. Because of loneliness, because they can convince themselves that it's not really going to turn out as bad as it looks, or because of a few other reasons.

Hytiäinen is very good in the lead role, all weariness and loneliness embodied in the body of an everyday man just trying to make his way through life with a minimal amount of pain, and Järvenhelmi is a wonderful icy blonde, able to work her magic on the main character simply because he will accept it, knowing there will be a catch somewhere, but not caring enough about the consequences to want to miss out on his time with her. Koivula is a standard crime boss, always in control and always ready to sacrifice meek lambs, and Heiskanen is the lone sweetness in amongst all of the bitter moments.

Kaurismäki certainly knows what he's doing here, and both the visuals and the dialogue deliver so much more than just whatever appears on the surface. He makes a lot of deliberate choices, very few of them the easiest options, and the end result is all the more impressive once you realise that you've been quietly affected by the power of the film as the end credits roll.

Although strange in the way everything is played out, from the style of many characters to the feeling of artifice around many of the main scenes, Lights In The Dusk works because of the way it uses the strangeness to dress up the mundane. It makes viewers work a little bit harder to see the obvious, which is itself part of the lesson here. 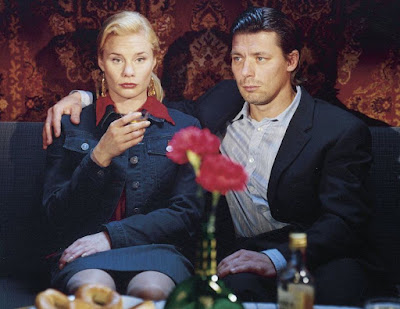