The more I think about his filmography, the more surprised I am by the fact that director Ciarán Foy keeps getting opportunities to helm potentially decent horror movies. His debut feature, Citadel, was solid, but nothing since then has shown him to be an assured hand. Eli is a prime example, although he's hindered by a laughably weak script.

Eli (Charlie Shotwell) is a very sick young boy, with an auto-immune disorder that makes him unable to live a normal life. His parents, Rose (Kelly Reilly) and Paul (Max Martini), pin all of their hope on one last treatment, headed up by Dr. Horn (Lili Taylor). But all is not well in the facility that they end up in, as Eli sees spirits around him, and starts to wonder if those treating him really have his best interests at heart. Perhaps he'll just end up being the latest victim of their experimental approach.

Eli just isn't all that interesting, I'm afraid to say. The way in which the main character is shown to be affected by the world around him isn't set up well enough, doesn't feel consistent, and will simply remind many viewers of one or two much better movies (such as The Others, for example). It doesn't help that you feel no sympathy, or care, for the other characters, a mix of the writing and poor casting.

Reilly can be good in the right role, and I have enjoyed her work in a number of movies, but this isn't the right role for her, especially when she's required to both turn some things around and provide some exposition in the final reel. I'm not too familiar with Max Martini, and his turn here doesn't make me want to rush to refresh my memory with his roles in other movies I have seen. Taylor is a highlight, doing her best with weak material, and almost managing to overcome it by simply being Lili Taylor. Shotwell actually does a good job, and his relationship with a young girl, Haley (Sadie Sink), who visits to talk to him from the other side of his window is another highlight, thanks to the performances of both young actors.

The cast might have fared better with a better script though. We'll never know. David Chirchirillo, Ian Goldberg, and Richard Naing have worked together to craft something absolutely risible. Not only is it a silly premise, once all becomes clear, it makes no sense and treats viewers like idiots by assuming they will just accept everything without questioning the logic of the film (important reminder, questioning the logic of a movie on the terms it is delivering material is not the same as expecting real-world logic from every movie you watch). Eli makes no sense throughout, and everything falls apart during a time when the writers obviously think they are being clever and creative.

Foy is no help. He admittedly does okay with individual scare moments, but fails to do enough to distract viewers from the failings of the script. If you're going to utilise cliches then you need to try to make other elements feel fresh. If you're going to journey into silliness then you need to either lay the groundwork from the earliest scenes or do a better job with the tone. Foy just goes along with a script that he really should have been aiming to constantly improve.

I am sure that some people will enjoy Eli. I have no idea who those people are, and I don't think many of the horror fans I know will think this one worth their time. 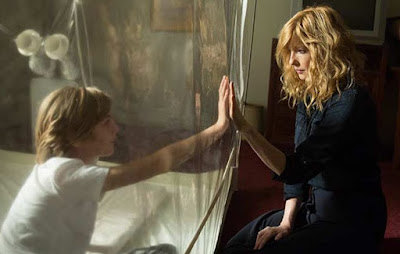