I don't know what others were expecting from Primal, one of the many recent Nicolas Cage movies to appear on streaming platforms, seemingly weeks after we heard about it being made, but I was surprised when I heard the plot summary and then heard people reacting negatively to it. I do understand people disliking the film, don't get me wrong, but I don't understand people loathing it if they have any rough idea of what they're letting themselves in for.

Cage plays Frank, a hunter of wildlife who is heading home with his latest shipment of captured animals, including a large white jaguar. The ship he is travelling on is also carrying a prisoner, Richard Loffler (Kevin Durand). Ain't it just a wild bit of misfortune that Loffler escapes? He also starts freeing some of the animals, leading to the ship having a bit of a dangerous Jumanji vibe about it (especially when people have to deal with dangerous monkeys). Frank wants to keep his collection of animals safe, and ends up being the best chance to recapture Loffler.

Okay, just to be clear here, Primal isn't really a film to class as good. The script, by Richard Leder, is far too full of groan-inducing dialogue and contrivances, there's a sad lack of any tension or thrills, and it lacks decent action beats. The fact that director Nicholas Powell has a background in the world of stunts makes the last omission all the more disappointing, considering the potential for some wild and crazy set-pieces. It's clear that someone had a fun idea that was then turned into a film without a big enough budget to realise even half of the potential.

Thankfully, if you're a fan anyway, you get Cage chewing the scenery. He's a blast in the main role, the kind of anti-hero who doesn't care about the people in charge, and just ends up spurred into action because he realises nobody else is as capable as he is. Durand is a decent villain, he can turn on the right mix of charm and menace, while both Famke Janssen and Michael Imperioli help to round out the main cast, as well as LaMonica Garrett.

You know what is coming along in the third act, you know that by the end of the first act, and there are some decent moments along the way. Monkeys, a snake, big cats, they all add to the fun, but none of them are used enough. There's also a lack of any good twists and turns, although things are hinted at here and there that the script never really turns into anything major.

Let's be very clear. This is a film that has Cage as a hunter, on a ship with a dangerous criminal, and a bunch of wild animals that are set free as events unfold. If you like Cage as an onscreen presence then how can you fail to at least enjoy this? If you dislike Cage then I don't know what to tell you, other than . . . you're missing out. 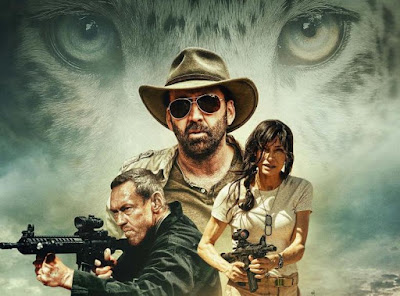