It's always a difficult Christmas when you head home for the holidays and find that your father has decided to turn your family home into a small b & b, without thinking about things like staff, supplies, or anything else a b & b owner may consider when formulating a business plan. Okay, it may not happen often, or at all, but it happens here in this Christmas TV movie.

Bethany Joy Lenz plays Lucy Ralston, someone as shocked as her sister (Amber, played by Grace Beedie), her brother (Will, played by Blair Penner) and his partner (Suzanne, played by Barbara Patrick), and even grandpa (Walter, played by Jay Brazeau). Robert Wisden is the father, Ted, who has had this bright idea. And there's an anonymous travel writer in the area, a woman who writes reviews that can make or break a small business. When Beth Thompson (Laura Soltis) arrives, stopping there due to a flat tyre, everyone believes her to be that writer, and so begins a comedy that has most of the family members pretending to be staff members, or other guests, as they try to get the best review possible for their father. Oh, and there's also another unexpected guest in the shape of the handsome and lovely Jake Finlay (Victor Webster).

Okay, hear me out here. I am happy to admit that I often give Christmas TV movies more leeway than most. I know the checklist, and I am happy to see the formula adhered to in a way that is cosy and comforting. Five Star Christmas is an anomaly, however, in that it hits all of the expected beats while also being a genuinely enjoyable movie. You're still not going to absolutely love it, especially if you're expecting something on par with a cinematic feature, but the comedy really works, especially in the scenes involving Will and Suzanne, who decide to promote themselves as windswept globe-trotters. Their first scenes, revelling in the chance to embody their new personas, are a lot of fun. Beyond that, you get a lot of moments in which wrong names are uttered, people are made to hide away from others who may recognise them, and the b & b is shown to treat the guests and staff just like family. Because most of them ARE family.

Director Christie Will Wolf is, as so often the case with people who helm these TV movies, a fairly experienced hand. She knows what shots are required, and she gets them all done. You have the snow-tinged glow throughout, and that particularly paradoxical warming cold that infuses the best of these films. Writer Alfonso H. Moreno has a lot of TV episodes to his credit, but he does a really good job here, making the whole situation far less cringe-inducing than it could have been. The third act needs to tie up the plot strands, and you get some romance (of course), but it feels earned after the fun of the first hour.

Lenz is easy to like in the lead role, striking a great balance between level-headed organiser and someone with a major emotional investment in the outcome, and Webster is a decent, safe, male. Wisden and Soltis have some nice scenes together, and I think you should already know how much I enjoyed the performances from Penner and Patrick. Beedie brings a nice energy, the younger sister not really sure of what she wants to do with her life, but gradually finding out more about herself in the midst of the madness, and Brazeau and Paula Shaw are both great fun (the latter playing a grandma who embraces her new role with gusto).

Whenever I review these Christmas movies, I always remind people that they are being reviewed AS Christmas movies. That still applies here. But I still think this is also, at times, something that stands out from the crowd by being more enjoyable than most, in a way that isn't just checking all of the festive film boxes. 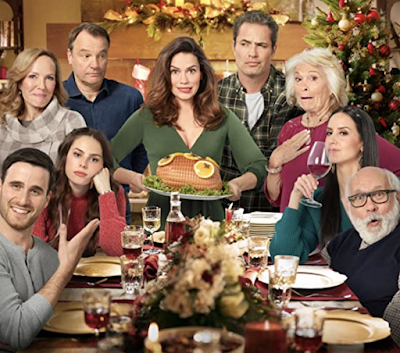