A lot of people had mentioned Werewolves Within over the past few weeks so I was keen to see it. I like werewolf movies, I like a good comedy horror, I figured this would be an easy one for me to enjoy. It turned out not to be as easy as I first thought. I didn't actively dislike this film at any point, the main cast members are too likeable or fun to keep that from happening, but it wasn't ever that good. It's not that funny, and the lycanthropy is barely a part of the film. It's as if far too many people have still to discover the superb Game Of Werewolves. Or even the more recent The Wolf Of Snow Hollow.

But let's focus on this film anyway, which is the one I am reviewing today. Sam Richardson plays Finn Wheeler, a forest ranger who has been posted to the small town of Beaverfield. The town is currently divided by the people who support a pipeline being proposed by a local businessman and those against it. Meeting a postal worker, Cecily (played by Milana Vayntrub), Finn gets to accompany her on her round as she introduces him to the various residents. It's not long until a dangerous secret is revealed, and Finn is tasked with trying to keep people calm and find out what is damaging generators and looking to potentially kill people. The signs all point to a werewolf, but there's a chance that it is just one of the more eccentric locals having dived headlong into murderous madness.

Richardson and Vayntrub are both excellent in their roles here. The former has already stolen a few scenes in a couple of movies from the past year or so, the latter isn't someone I can say I have spotted in any other movies, but I'll look forward to seeing her in more after enjoying her work here. Everyone else does great work, even if I'm not going to namecheck them all here. Definite highlights include Catherine Curtin as Jeanine Sherman, the woman who owns the hotel that Finn is staying at, Wayne Duvall as the businessman, Sam Parker, and Glenn Fleshler as the gun-toting, unfriendly, Emerson.

Written by Mishna Wolff, making her feature-writing debut with a videogame adaptation that certainly doesn't feel constrained by that remit (although I am not familiar with the actual game itself), Werewolves Within is generally an amiable experience. That's about all I can say about it. The direction from Josh Ruben, who also gave horror fans the much-liked Scare Me (liked by a group of people that would not include me among them), does everything required without ever taking the material up a notch. None of the comedy is mined for bigger laughs, none of the few horror moments are made as horrific as they could be, and I found it impossible to ever really care about the mystery element. The majority of the film may be trying to create a The Beast Must Die guessing game, but what's the point in crafting that kind of curio piece if you don't even provide an updated "werewolf break"?

Maybe people enjoy this more when they also have the game as a reference point, so feel free to add a point or two if you fall into that category, but I kept waiting for this to deliver something . . . more. It's pleasant enough for the duration, and doesn't run too long, but it's a shame that it wasn't tweaked to increase the comedy, the frights, or both. Still one to recommend, tentatively, thanks to the sterling work of everyone in the cast. 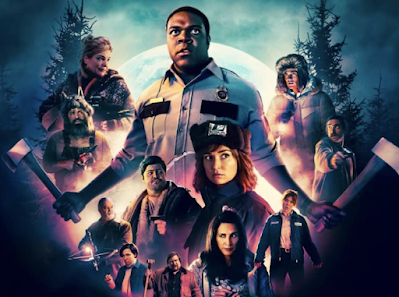