Netflix And Chill: The Last Mercenary (2021)

The longer his career continues, the easier it is to see Jean-Claude Van Damme as more than deserving of his status among the action heroes of the '80s and '90s. His films always had humorous moments dotted through them, which is something some of the other big names found a bit tougher (Arnie being the one who moved most successfully into comedies, Steven Seagal to this day not wanting anyone to ever see him smile, or be the cause of an inadvertent smile), and he always convinced with the cinematic action.

Having lost his way for a while, with a mix of personal problems and bad judgements marring his filmography for a good ten or twelve years, Van Damme took a big risk with the self-reflexive, and superb, JCVD. It's not been a consistent filmography since that film was released, back in 2008, but it has certainly been one with more hits than misses. And more interesting choices than he was able to make back at the start of his career. He has been involved in some animated films, he has been a villain, and he has played a small supporting part in a strange alien movie. Even his small-screen work, Jean-Claude Van Johnson, proved a hit with those who gave it their time, more comedy inspired by his willingness to poke fun at himself and use his back-catalogue as a source of multiple gags and references.

The Last Mercenary essentially repeats a lot of the comedy that we've seen Van Damme do before, but that doesn't make it any less enjoyable. JCVD plays a legendary secret agent named Richard Brumére AKA The Mist. Richard disappeared many years ago, vowing to stay silent in exchange for a deal with the French government that would protect his young son, Archibald. Many years later, Archibald (Samir Decazza) is oblivious to the fact that his ID is also being used by a Scarface-obsessed crook named Simyon (Nassim Lyes). This leads to the government deal breaking down, placing Archibald in a lot of danger, which means Richard has to venture back where he isn't really wanted, or welcome. And he has to figure out the right time to reveal that he is Archibald's father. A plan is hatched, one that utilises the various skillsets of a politician (Alexandre, played by Alban Ivanov), a young woman who is Archibald's friend (Dalila, played by Assa Sylla), and an old colleague (Marguerite, played by Miou-Miou).

Directed by David Charhon, who also co-wrote the screenplay with Ismaël Sy Savané, The Last Mercenary works as well as it does because of how well it uses Van Damme. He may be a couple of decades beyond his prime, but the man can still kick ass. What's more, he has gradually improved as an actor, in terms of both serious moments and the comedy. That's not to say that he's any master of the craft, but this doesn't need him to be. All it needs from Van Damme is for him to be Van Damme, whether that's him showing his kicking power, dancing in a way that will remind everyone of THAT great moment in Kickboxer, or any of the other little jokes and references that just wouldn't work without Van Damme's skillset and legacy. Although things wobble slightly whenever there's an attempt to create a kind of Clouseau/Dreyfus animosity between Richard and Commandant Jouard (Patrick Timsit), that's easy to overlook when you zip quickly to another decent bit of comedy or action, and there are enough scenes here incorporating both. And the big final fight sequence, set in a games room and soundtracked by the funk-tastic tune "Do Ya Wanna Funk?", is a very satisfying way to showcase everything that the film is aiming for.

Apart from our leading man, the rest of the cast are generally quite excellent throughout. Ivanov is asked to play the comedy a bit broader than I would have liked, but he does well in his role, and Decazza is good as the young man ill-prepared to be thrown into a world with so many risks to his wellbeing. Sylla is a real highlight, just emanating charisma throughout every one of her scenes, and Lyes is a lot of fun as the man who doesn't just admire, but wants to BE, Tony Montana. Miou-Miou is a great member of the team, and there are also fun turns from Eric Judor, Djimo, Michel Crémadès, and everyone else involved.

There have been a lot of comedic action thrillers over the past five or six years (with Spy being one of the best) and a lot of them have done a great job of melding the genres together. While The Last Mercenary may not be the best of them, it easily sits alongside them. More for fans of the leading man, and the decade that propelled him to stardom, this is one that I easily recommend to people who probably already know that they're going to have fun with it.

There are SO many other JCVD movies reviewed here. 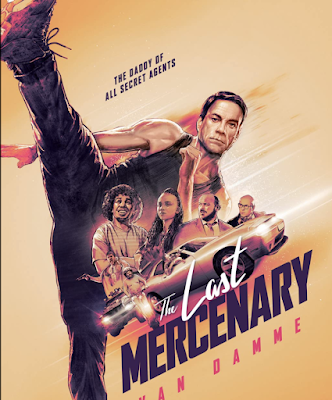