Magdalena Kolesnik plays Sylwia, a young woman who works as a fitness instructor, which involves putting herself out there online, building up a fanbase and building up an inspirational image. But it isn’t all smiles and fitness. Sylwia is going through a very rough time, feeling lonely and having to deal with a stalker who has parked up outside her home.

What’s interesting nowadays is how perception of celebrity has changed in the arts, as celebrity itself has changed. We used to see movies about famous actors and musicians, films that explored their persistence, and often their need to feel love emanating from a receptive audience of fans. Now we see different journeys, and different levels of effort made, as it has become so much easier to attain a certain level of fame. If you want fame then you can have it. If you don’t figure out how to become famous, you can become notorious. And all of this usually happens with a filter that keeps the truth hidden away.

Writer-director Magnus von Horn wants to look at the fairly common modern phenomenon of living your life with consideration for your public image, and he takes things in a couple of interesting directions. Unfortunately, the best of the points being made end up buried by a lot of familiar moments that pad the runtime out far beyond what was needed. It’s actually hard not to imagine Sweat working better as a short film, but Von Horn tries to justify his feature runtime with a number of varied plot beats, some that work much better than others.

Although there are a number of solid supporting players here, from the stalker to Sylwia’s relatives, this film relies on the attention of viewers being held by Kolesnik, and she is more than up to the task. Finding ways to increase her energy levels, and often put on her best smile, Kolesnik managed to convey the enthusiasm and dedication of her character without coming across as vapid and fake. The script helps her out a lot, especially when presenting conversations about one piece of content that people view as “off brand”.

Admirable for not going in the most obvious direction, Sweat is also a film that ultimately cannot provide viewers with a truly satisfying experience. It shows someone struggling to be the best they can be on a stage they have built for themselves, and some of the more interesting points to be made about that life are lost, arguably much like the central character. This is a nice character study, intriguing for choosing to reveal more about someone who alternated between being as transparent as possible and being a marketable commodity, but it never feels like essential viewing. 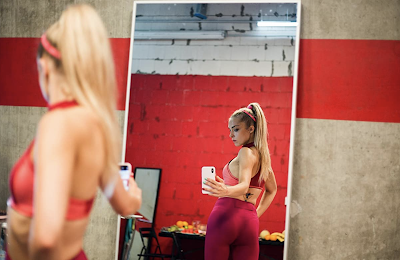