Crashing through from the fairytale world to the harsher realities of our own world is a seam that has been mined by Disney before, most notably with the very enjoyable Enchanted. And if you liked that movie then you should like this one. It's very similar.

Jillian Bell plays Eleanor, a fairy godmother in her training years. Unfortunately, by the time/if she ever qualifies, it may all be too late. People don't seem to need fairy godmothers any more. Nobody is getting their "happy ever after". Eleanor decides to change things by making things right for a young girl named Mackenzie, after finding her letter in the archives. That letter, however, was written some time ago, and Mackenzie (Isla Fisher) is now a stressed-out single mother, working for a news station that seems determined to gain ratings by focusing on negative stories and fear-mongering. Mackenzie seems to have accepted that she's not going to have a "happy ever after", but she may also be holding back her daughters, Mia (Willa Skye) and Jane (Jillian Shea Spaeder).

Your enjoyment of Godmothered will depend on a number of factors, not least of which is how much you warm to Jillian Bell in her main role. I tend to find Bell very hit and miss, depending on how irritating her character is supposed to be (and she tends to be given irritating characters in many of her films), but she's a lot of fun as the trainee with more enthusiasm than natural talent, doing her best to get results without the full skillset that some others have. You also have to accept the predictability of it all, the weak mix of characters, and the sweetness of the big main lesson. Having said that, you usually have to accept those things with most Disney movies, so it's no major inconvenience if you know the kind of film you're about to watch.

Although the script by Kari Granlund and Melissa Stack doesn't take any chances, director Sharon Maguire keeps everything moving along nicely enough, and staves off boredom with some smaller-scale set-pieces (be it Mackenzie being inconvenienced by a huge ballgown that has magically appeared on her or a race-against-the-clock finale that relies on Eleanor finally perfecting one or two of the traditional spells).

Bell and Fisher have fun together, Spaeder and Skye are just fine, Santiago Cabrera is a prospective "prince", literally named Hugh Prince, and Utkarsh Ambudkar provides some laughs as the boss who thinks bad news = ratings. June Squibb is a delight as Agnes, the fairy godmother who narrates the tale, and Jane Curtin is the strict head of the fairy godmothers who ends up racing to stop Eleanor making what she assumes will be a big mess of things.

Light and enjoyable from start to finish, the biggest thing going against Godmothered is that, while it wanders through some very similar terrain, it isn't Enchanted. That's no reason to criticise this movie too harshly though. One Disney movie being very similar to another Disney movie is hardly anything new. It's often part of the appeal. 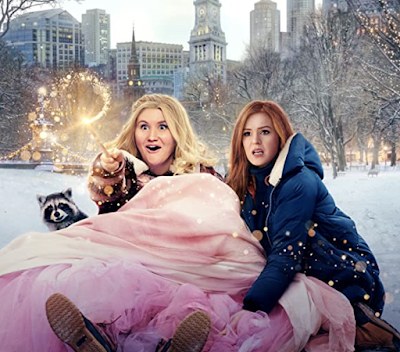