First of all, Super Dark Times was recommend to me by someone I like to think of as a good friend, yet also know doesn't always have tastes in line with my own. Whenever he recommends something highly though, well, I always go into it with a sense of optimism. That optimism isn't always well placed. Secondly, and important to note for others who may be debating whether or not to watch this movie, Super Dark Times starts off feeling very much like so many other movies that have mined the same ground as Stranger Things lately, but stick with it and you'll be rewarded with a very different beast.

Written by Ben Collins and Luke Piotrowski (who have built up a nice selection of genre films over the past few years, including the enjoyable Stephanie), this is the tale of teenagers being typical teenagers. The heart of the film is Zach (Owen Campbell) and his firm friendship with Josh (Charlie Tahan). Everything seems happy and normal until a nasty accident starts to push a wedge between them. Covering up their misdeed, to put it mildly, Zach becomes more and more worried, and Josh seems to be becoming more and more distant. And maybe even more determined to use the accident as a springboard for a whole new way of life.

The directorial feature debut from Kevin Phillips, this is a well-paced and well-crafted work that mixes together the ups and downs of teenage turbulence. And the journey that the main characters go on is done in a way that somehow manages to avoid feeling as if things have gone from 0 to 100 with no gradual increase in the speed of the changes. That's not to say that the plot doesn't actually unfold that way, it does, but there's enough time given to little moments scattered throughout that help to distract viewers from feeling rushed towards what is an enjoyably dark and twisted final reel.

I'm not sure there was any need to really set this in the early 1990s, and keeping everything set in the modern day would have helped to avoid that early feeling of "uh oh, they're going to do Stranger Things", but it doesn't feel forced down our throat for most of the runtime. It also doesn't really affect the plot in any way. Maybe Collins and Piotrowski assumed that the latest tech would remove any tension. Or maybe that's the time they remember from their own teenage years (I have no idea what age they actually are, this is purely hypothetical).

Campbell and Tahan are both great, and they both go through some big changes from their first scenes to their last. Max Talisman and Sawyer Barth are also good as part of the foursome who eventually start to go their separate ways, some less voluntarily than others. Elizabeth Cappuccino gets less to do, playing Allison, a subject of young love, but she does well in her role, and everyone else, whether teen or adult, helps to round out a movie world that stays quite believable and grounded.

Weak opening aside, Super Dark Times is an excellent little film that lives up to the title. Check it out if you already enjoyed Summer Of '84. Check it out even if you didn't enjoy that one. It's worth at least giving a shot. 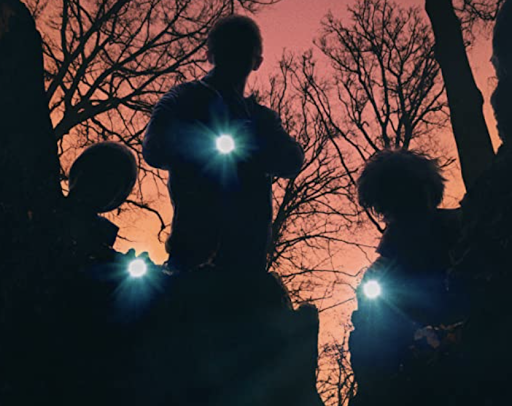