Considering how many people still view Wonder Woman as the best of the initial wave of DC cinematic universe, it's no surprise that expectations were high for this sequel, set in the 1980s (as you may have gathered from the title). It's equally unsurprising that many have been disappointed by it, although I'm not sure whether the rescheduling of the release helped or hindered it with audiences.

Gadot returns to the main role, Diana Prince, and this time she's helping to defeat baddies in the 1980s. She dives in, rounds them up, and disappears again. Things are about to get quite strange, however, when someone discovers an artefact that can make your wishes come true. At a price. The quiet and clumsy Barbara Minerva (Kristen Wiig) wants to be more like Diana, not realising exactly what she's wishing for, and Maxwell Lord (Pedro Pascal) wants, well, everything. And he seems to know exactly what it will entail. Does Diana have anything she would wish for? Well, the return of Steve Trevor (Chris Pine), taking over the body of another man, would strongly suggest that she does. Will she be able to defeat Lord, knowing that it may lead to her having to rescind her wish?

Patty Jenkins is back in the director's chair, and she's once again more than up to the task. Wonder Woman 1984 isn't a film that suffers from poor direction. It suffers from the writing though, which has Jenkins working alongside Geoff Johns and Dave Callaham. From a pointlessly lengthy opening sequence to a serious dearth of action set-pieces, Wonder Woman 1984 is a pale imitation of its predecessor. It's also not helped by the fact that the time period isn't used to just cut loose and have some more fun. There aren't even a number of easy needle-drops throughout the soundtrack. And let's not dwell on the way in which Diana and Steve get to have some more time together, a problematic scenario that isn't ever glossed over enough to make it seem any more palatable.

Lord is a weak "villain", and Minerva at times feels exactly like Catwoman in Batman Returns, which is even more of a shame considering how good Wiig does in the role, but there IS one big plus. The main thrust of the plot, and the moral lesson at the heart of things, is a timely one. Some people may view it as being a bit too nice and safe, without any feeling of major stakes being played for, but it's a nice antidote to the motives behind so many other comic book movie villains in recent years.

Gadot is still perfect in the lead role, and Pine works hard to make his shoehorned inclusion feel worthwhile. Pascal has to spend a lot of time being stressed and sweaty, which he does well enough. The highlight is Wiig though, giving a performance that present an impressive transformation of her character. I hope she gets to do something similar soon, but preferably in a film more worthy of her talent.

Despite the major script problems, I still enjoyed this. It has a lot of heart, and a sweet optimism that feels in line with the era it is set in. But it also has a multitude of problems that could have been easily solved by another couple of drafts of the script. And the confidence to go with the brash and bright stylistic choices used in the trailer and advertising campaign. I guess we'll just need to see if things are changed up enough for the inevitable third instalment. 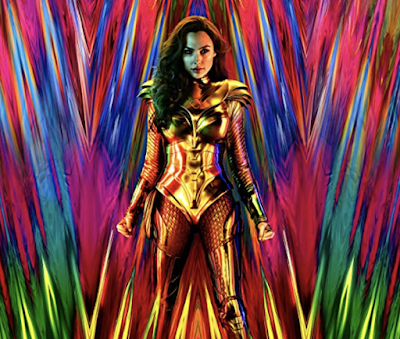