I first encountered Rudzinski when I checked out one of the “Meowy” movies (and let me say now . . . it was cute and fun, and you could pick many worse low-budget short films to watch, as long as you know what to expect). Having then discussed it briefly online, Rudzinski was gracious enough to point out more in-jokes I may have missed, and directed me to where I could see more of his work. I am just sorry that it took me this long to dive back into the weird and wonderful world of this guy, because he definitely works on my wavelength.

As well as Duke and the pizza delivery guy, other memorable characters include the lusty Laurie (Sé Marie), the unicorn-loving Sarah (Haley Madison) and potential hero Cowboy Cool (P. J. Gaynard in an amusingly silly park-worker outfit). The acting may vary wildly in quality, but at least everyone involved taps into the infectiously silly vibe that Rudzinski puts ahead of everything else.

You also get the usual load of nods and references from Rudzinski scattered throughout the film, from Dumb & Dumber to The Evil Dead and many more. If you’re a movie fan then you can see the same love for certain films in every Rudzinski outing, and that is another factor that can help you overlook the limitations of his minuscule budgets.

Do I recommend this to all? Hell, no. Do I recommend it to anyone? Not without a main proviso. I hope some people watch this, and I hope they have as much fun with it as I did, but you have to accept it for what it is. It is a film made with a sense of fun, a load of heart, elbow grease, spit and polish. And maybe some sticky tape. If all of that cannot make up for the fact that it was made with very little actual money available then look elsewhere. But I hope some people can look beyond the surface, because you don’t get enough comedy slasher movies about deadly killer carousel unicorns. 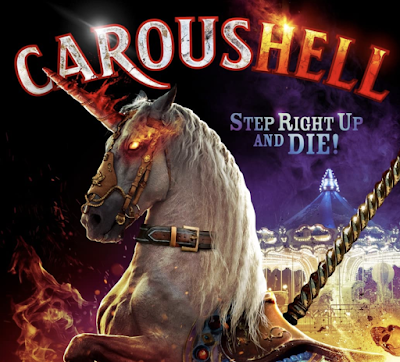