It's not surprising that Super Shark is a bad film. It's directed by Fred Olen Ray (who also co-wrote the thing with Clyde McCoy and Antonio Olivas). It has the word shark in the title. After the word super. And the biggest name in the cast is John Schneider. Now I like John Schneider in most of his movie appearances but an A-list headliner he ain't.

I'll try to contain my giggles while I attempt to explain "the plot". You see, there's this shark and it can even jump onto land and do other super stuff, which makes it a Super Shark. The shark is responsible for destroying an oil rig and that brings Oceanic Investigator Kat Carmichael (played by Sarah Lieving) onto the scene. She hires a boat captained by a local man named Chuck (played by Tim Abell) and the two soon realise that something wasn't quite legitimate about the drilling in the area. Kat questions company man Wade (played by Schneider) about his business practices but while it quickly becomes clear that Wade has something to hide it also becomes clear that there's something potentially damaging in the sea. Is it pollution? That may be what some people are thinking until Super Shark pops his fin up to say hello.

Knowing that this would be a bad film, I was hoping to at least find it one of the many "so bad that it's good" movies I have enjoyed so much over the years. A lot of films from The Asylum come under that category and Fred Olen Ray has made one or two good films over the years. Hollywood Chainsaw Hookers isn't for everyone but I was damn glad when I finally got to see it, and Evil Toons is, well, ummmm, well actually it's pretty bad but showcases a few fantastic scream queens.

Sadly, however, this is just a bad movie that doesn't even do enough to allow viewers to laugh at its ineptitude. I gave the thing an extra point because of an amusing, and completely gratuitous, bikini babes competition but there isn't enough good stuff to make up for the horrible CGI (the shark looks like it has just escaped from the 1980s Jaws arcade game), the poor script, the poor acting (Schneider still gets a pass but he's the only one), the unappealing cast of characters and the sloppy execution of every moment that features the shark.

It's bad. The fact that there's a groovy theme tune and that the makers of the movie clearly wanted to replicate something along the lines of Sharktopus doesn't make it any better. Well, okay, I admit that it DOES make it a little bit better but I'm still reining in my generosity for this one. 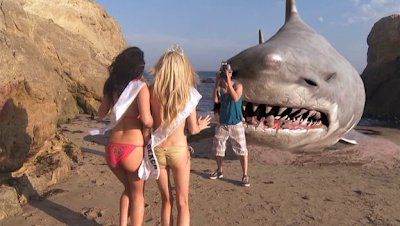