Takashi Miike has spent the last quarter of a century making a LOT of movies. And, in between 1999 and 2002 (approximately), his profile was considerably raised in America and Europe with a selection of unforgettable, and astonishing, works. Films such as Audition (still perhaps his finest hour, for me anyway), Ichi The Killer, Visitor Q, The Happiness Of The Katakuris, and the Dead Or Alive trilogy. Miike was clearly someone worth watching, even if he often placed scenes in his movies that were tough to watch.

Dead Or Alive, at its core, is a very basic film about warring criminal factions and the cop trying to clean things up. There’s a large cast of supporting players, and a number of disturbing vignettes, but the focus ends up on a gangster named Ryuuichi (Riki Takeuchi) and the man who ends up undoing his plans (Sho Aikawa, as Detective Jojima). These two men move through a narrative that allows them to show the shading of their character before finally attempting to paint them as opposing black and white pieces in a winner-take-all endgame.

To call the opening 5+ minute opening sequence of Dead Or Alive blistering is pretty accurate. But anyone who has yet to see the film should be made aware that this is REALLY blistering. It’s an audio-visual assault on your senses, and I’m not using that phrase to be hyperbolic. You get gunfire, dancing, sodomy, drug deals, arterial spray, one hell of a long line of cocaine being snorted, a rocking track overlaying everything, and lots of noodles. The entire sequence sets up the tone of the film, although viewers will undoubtedly breathe a huge sigh of relief when Miike starts to slow things down to a more bearable pace.

Of course, the slowing down of the pace of the movie also means that the unpleasantness, when it occurs, is onscreen for longer. Whether it’s a maker of pornography trying to set up a very twisted scene for a niche market or a drugged-out woman lying around in a small pool full of . . . . . . . well, I’ll let you see for yourself. Even the hardiest of viewers may find their stomach churning on occasion.

And while you could make the valid point that so much of what unfolds here is pointlessly shocking just for the sake of it, you could also argue that Miike, and/or writer Ichiro Ryu, is deliberately railing against a cinematic tradition of cool Japanese killers. Handsome leading men who order clean, swift murders, and who act within a strict code of honour. I may be reading too much into things, and Miike has made films with his fair share of cool killers too, but it almost feels as if this movie deliberately forces viewers to look into the cesspool that violent crime can inhabit. By exaggerating things, by making moments so repugnant that you can almost smell something rotten while the film is running, Miike seems to be using the material to teach us all a lesson about glamorising a lifestyle most of us will hopefully never see outside the edges of a movie screen. 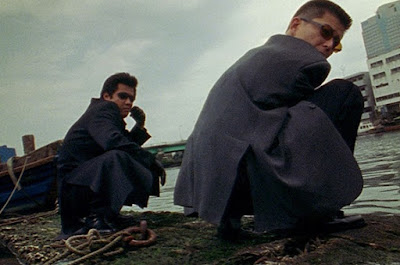