Every great magic trick consists of three parts or acts. The first part is called "The Pledge". The magician shows you something ordinary: a deck of cards, a bird or a man. He shows you this object. Perhaps he asks you to inspect it to see if it is indeed real, unaltered, normal. But of course... it probably isn't. The second act is called "The Turn". The magician takes the ordinary something and makes it do something extraordinary. Now you're looking for the secret... but you won't find it, because of course you're not really looking. You don't really want to know. You want to be fooled. But you wouldn't clap yet. Because making something disappear isn't enough; you have to bring it back. That's why every magic trick has a third act, the hardest part, the part we call "The Prestige".

The Prestige is another sumptuous Christopher Nolan film in a fine line of sumptuous Christopher Nolan films, co-written by himself and his brother Jonathan, based on the novel by Christopher Priest, and arguably more intriguing and intimate than anything else he has directed since he reached the level of success earned by Batman Begins. That's not to say that this is better than any of his other films since then. It's just nice to see him work on something of a smaller scale, something that doesn't need to warp cityscapes or throw you headlong into grand moments seemingly designed to look best in IMAX.

After a stage trick goes horribly wrong, Robert Angier (Hugh Jackman) and Alfred Borden (Christian Bale) find themselves growing more obsessed with each other. Each wants to outdo the other, but Borden seems to have the upper hand when he achieves great success with his "transported man" illusion. Angier grows more and more desperate to learn the secret of the trick, unaware of what it will end up costing both men if he continues on his self-destructive path.

The Prestige is very much constructed like a magic trick, and very much in line with the quote above. But while this could have seemed a bit precious and self-congratulatory, with the Nolans spelling out the structure of the film and trying to trick viewers on the way to the finale, it instead comes over as something that has simply been crafted with great attention to detail and an aim to entertain. The twists in the plot are enjoyable enough, but rewatching the film emphasises just how unimportant they are when it comes to the quality of the tale. You can know how a card trick is done, but that doesn't stop you enjoying it being done by a slick showman who also tells you an entertaining story while he's trying to keep everyone else from figuring out his secrets.

Jackman and Bale are both great, although Bale's accent does occasionally veer a little bit towards parody cockney territory, and they both get their share of excellent moments throughout. Michael Caine is also very good, helping both men out at different times in their lives. Piper Perabo, Rebecca Hall, and Scarlett Johansson all play women who are adversely affected by the obsessions of these men. They're not given as much to work with, at all, but all do a good enough job, with Hall giving a surprisingly effective and moving performance that sits up there with the best I have seen from her. David Bowie plays Tesla, which allows him to yet again be effortlessly cool in a much smaller role that absolutely works for him, and both Andy Serkis and the magical Ricky Jay do well with their brief amount of screentime, Jay is a cameo you could easily miss.

The music by David Julyan is very good, the production design and composition of every scene is gorgeous, and the editing allows for lots of nice foreshadowing and reveals on the way to . . . The Prestige.

All too often overlooked nowadays, which is understandable considering the impressive body of work that Nolan has built up, The Prestige is definitely worth a watch/rewatch. It's a film for fans of Nolan, for fans of the cast, for fans of magic, and for fans of great film-making.

Buy the shiny disc here.
Or, in America, buy it here. 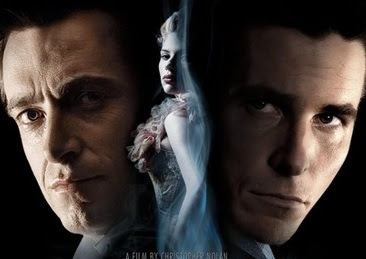