Written and directed by Joanna Hogg, The Souvenir is an interesting and intelligent look at the blinkers some people can so easily put on while in a relationship with someone they are deeply in love with. It's also quite poorly handled, surprising considering the amount of praise it received when initially released.

Honor Swinton Byrne plays Julie, a film school student who ends up sliding into a relationship with Anthony (played by Tom Burke). Anthony works for the Home Office. It also turns out that he's a heroin addict, but the kind of heroin addict who can continue to charm and fool many people around him, even as his behaviour gets worse and worse. Those people do exist, and Hogg may have even known someone exactly like Anthony (considering the fact that the film feels pretty semi-autobiographical throughout), but it's an important stumbling block between the viewer and the events unfolding onscreen.

The performers all do well here, with Swinton Byrne especially arresting in a debut lead performance that is nigh-on impossible to discuss without considering how well she could follow in the footsteps of her mother (Tilda Swinton, who also appears here, playing . . . Swinton Byrne's mother). Burke tries his best, despite the script working against him, and there are decent little turns from Swinton and one or two others, including an all-too-brief turn from Richard Ayoade.

Hogg observes the ups and downs of the central relationship with her usual care. This is the clean, almost sterile, world of the upper classes, where even drug addiction doesn't automatically lead to squalor and grime. In fact, good grief, viewers are only ever shown the behaviour caused by the drug-taking, never the act itself. Is that because Hogg never saw it? Or is it because she wants to allow her viewership to believe they are seeing a peek into a whole other world without ever actually showing them anything that might make them genuinely uncomfortable? Sadly, it feels like the latter, which is a great shame, especially when she has onscreen characters discussing the way they view the world from a position of great privilege.

Perhaps I am being a bit too harsh here, you could argue that I am getting my hackles up as I spy some class warfare skirmish that is never present. You could also argue that those who have more money, or access to more money, can always function better while addicts than those who are poor. But that's kind of the point. Hogg may be writing what she knows, but this could have easily been given a bit more work to resonate with so many other people. Add some more troublesome incidents. Add a lot of interference and undisguised loathing from those looking on. Add texture to let viewers know that even the bubble of class doesn't protect people completely from the greatest damage that such self-harming vices can cause.

As I said, however, the performances here are very good. Swinton Byrne is a riveting presence, and I look forward to whatever she does next. The look and feel of the movie is also very good, for what it is. The biggest problem is the script, and it's a problem that none of the other elements can quite distract you from for more than a few minutes at a time.

You are welcome to buy the movie here. 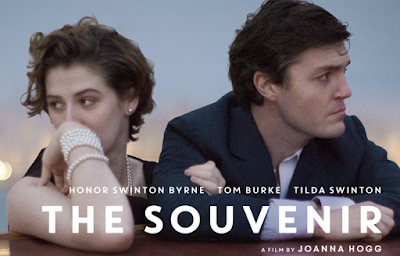