There's a fun idea at the centre of Monster Party, but it's also just a bit too silly. Murderers who are trying not to keep murdering get themselves some support network, in the same way as alcoholics use the AA. That should allow them to stay "dry" and keep everyone safer. A bunch of these murderers are gathered together in one house, while Casper (Sam Strike), Iris (Virginia Gardner), and Dodge (Brandon Micheal Hall) are trying to rob it. The robbers are obviously unaware of the deadliness of the party guests and home owners, but they'll soon discover it.

Written and directed by Chris von Hoffmann, his second full movie after numerous shorts and the feature Drifter (which I have not seen), Murder Party is, as mentioned at the start of the previous paragraph, a fun idea that ends up being a bit too silly. And I'm not sure if the material would have been better-served by making it a more subtle piece of work or by leaning harder into the fun of the premise.

It's a film that feels hard to say too much about, because none of the extra elements around the main thrust of the plot are worth the time spent on them. A lead character who needs the money to help his in-debt father to pay off someone he seems to regularly owe? Don't care. Characters acting upset that they are breaking their non-murdering time? It doesn't work. An extra house resident who turns up and looks like they've just escaped from The Funhouse? It's one additional scene that adds nothing. In fact, it ends up changing things for the worse.

The cast do okay, but it's a shame that Von Hoffmann places us alongside the three leads and younger members of the household when he has also managed to procure the talents of Robin Tunney, Julian McMahon, and Lance Reddick. The latter two are particularly fun, but Tunney is excellent as a woman tired and fed up of those not strong enough to avoid bloodshed. Strike, Gardner, and Hall aren't bad, they're just not good enough to keep rooting for. And very few of the other young cast members even make an impression, aside from Erin Moriarty (a member of the deadly family who may be different from the others). Kian Lawley stands out for all the wrong reason, he's neither threatening enough, nor is he enough fun in his role, and the same can be said for both Chester Rushing and Jamie Ward, both of whom you'd be forgiven for even forgetting they were actually in the film.

There are one or two good moments dotted throughout this, but they actually come along at the very beginning and end of the film. And those are the scenes bookending the "monster party" itself, which is surely not how Von Hoffmann intended things to seem. Perhaps he'll do better with his next feature. Maybe it will help him to work from a good idea developed by another writer. Or he'll just work harder to make the leads more worthy of your time and attention. 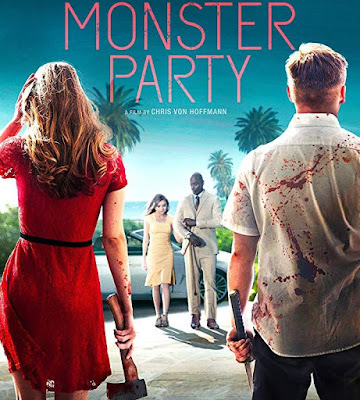