Julianne Moore is Dr. Alice Howland, a linguistics professor who starts to worry when she realises that her ability to recall words seems to be diminishing. After a number of sessions with a doctor it becomes clear, although not quite believable, that she has early onset Alzheimer's disease. She has to break the news to her family, and also has to set in place a number of measures that will help her live a nirmal life for as long as possible.

This is standard stuff, very much TV-movie-of-the-week. The screenplay, by Richard Glatzer and Wash Westmoreland, is based on a novel by Lisa Genova, which at least makes everything more interesting and powerful by having Alice be a linguistics professor. She arguably knows the value of individual words more than most, highlighting the deterioration of her mental acuity in the first stages of her illness.

Glatzer and Westmoreland also direct the movie together. While they don't show themselves to be experts in the field, they're smart enough to cast well and intersperse the second half of the movie with some moving moments.

Moore is excellent in the main role, as you'd expect her to be. There are one or two moments in the first half of the movie that have her repeating herself from past performances, but it's when she starts to lose aspects of her main identity that she truly shows what she's capable of. It's not up there with her best performances, in my opinion. It's still very good stuff though. Alec Baldwin puts in another great supporting turn (he's never disappointing in those roles), and Kate Bosworth and Hunter Parrish are two of the three grown-up children who struggle as they see their mother losing her mind. But it's the third child I'm going to spend the most time discussing. She's an aspiring actress, and still finding her place in the big world before all of her hopes and dreams are dashed. Played by Kristen Stewart, she's the best of the supporting characters, and Stewart gives perhaps the best performance in the film. Often sidelined, and often treated as if she doesn't know her own mind, she can probably see the situation that her mother is going through from a much closer perspective than anyone else around her, leading her to be the most selfless and sympathetic of the group.

It's a shame that the film just isn't a bit better. I guess it's difficult to make a movie like this feel like anything more than a well-intentioned melodrama. The cast all try hard, but can only raise it up so far. It's worth your time, and those wanting some inoffensive drama will certainly enjoy it a bit more than I did. Ultimately, it's quite forgettable, which is a tragic irony. 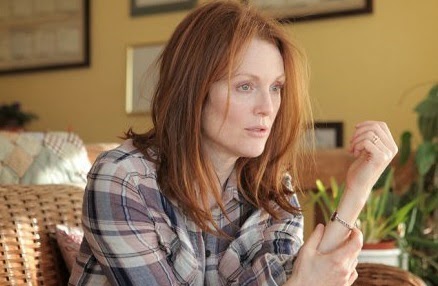