Directed by Sam Mendes, who also co-wrote the thing with Krysty Wilson-Cairns, 1917 is that WWI film that looks as if it is all made in one shot, with some of the hidden cuts easier to spot than others as you follow the main characters on a quest to the front, to deliver a message that will stop a load of soldiers from falling into a trap laid for them by the enemy.

That's really all there is to it. Dean-Charles Chapman and George MacKay play Lance Corporal Blake and Lance Corporal Schofeld, respectively, the two soldiers sent through dangerous territory to deliver the message. And the cast also includes small roles for Colin Firth, Andrew Scott, Mark Strong, and Benedict Cumberbatch. The more recognisable faces seem to help mark various chapters in the journey, with most of the other people onscreen either unrecognisable or just featured as one part of the military unit they're enlisted in.

There was a time when I considered attempting to write this review in one long ramble, hence that lengthy opening paragraph. But then I decided that would be too painful to read. It's a gimmick that would work worse on this blog than it does onscreen, and it doesn't work that well onscreen. Maybe war isn't the best subject for gimmickry, or maybe this technique (one shot/long scenes without cuts) already feels slightly overused, thanks to some recent great examples.

That's the main thing about 1917. It's quite dull. The acting is just fine from everyone involved, the cinematography from Roger Deakins is pretty glorious, and the music by Thomas Newman is there to ensure that you never forget how important and impressive the film is. That's in line with every other aspect of the film.

Considering the main message of the film is one we have seen many times before (which, in itself, is no reason to NOT make a film), and considering we don't get to learn as much about many of the main characters, 1917 is a film that turns out to be all about itself. It's all about that pretend one shot, it's all about Mendes marshalling everyone to get his vision onscreen, it's all about nothing more than how it all looks.

That wouldn't be so bad if it was also thought-provoking or interesting. It isn't. 1917 is a very dull war movie. And war during wartime is far from dull, I'm sure, which leaves me thinking that Mendes has somewhat let down the many people he had set out to honour. There are a couple of cinematic moments that do make it worth your time, for the scale and skill of the visuals, but that's the best thing I can say. 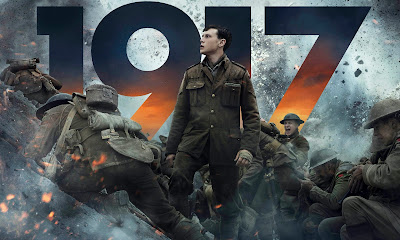