If you haven't seen Ready Or Not yet then what have you been up to? Oh, I get it, you have just been too busy, like myself, dealing with life stuff. It's not always easy to get along to the cinema, even when something is being raved about, as this was.

Samara Weaving plays Grace, a young woman who is taken to the family home by her hubby-to-be, Alex (Mark O'Brien). The wedding arrangements allow for the usual mix of friendliness, civility, barbed comments, and resentment, but things take a turn for the worse when Grace is asked that evening to draw a card, one which will decide on a game the family has to play. She draws one that says "hide and seek", and it turns out that this means the family has to hunt and kill her before sunrise, or they believe they will be struck by a deadly curse.

Directed by the talented duo of Matt Bettinelli-Olpin and Tyler Gillett, Ready Or Not is a fun and bloody romp (yes, I used the word romp here - deal with it) that is boosted by a few select talented cast members helping to raise the material. The canny casting is essential, as what could have been a sharp and witty script is surprisingly weak. Guy Busick and Ryan Murphy (AKA R. Christopher Murphy) do a good job of getting everyone into place and delivering the little morsels of exposition throughout, but they fail to do enough to raise this above a number of similar genre films from recent years (including the enjoyable Mayhem, which also starred Weaving). For those who have seen the film and don't agree with me at all, I'd like you to consider a) whether or not you enjoyed certain characters because of how they acted or because of who was portraying them, and b) how much worse this would have been with someone in the main role who didn't have the charisma of Weaving.

Fortunately, we DO have the charisma of Weaving, who seems to have been poised on the very edge of proper stardom for a couple of years now. She's consistently brilliant in this, moving believably from someone understandably freaked out by events to someone determined to survive. O'Brien is okay as the love of her life, despite showing no hint of what someone might see in him. Thankfully, you get a wonderfully wry turn from Adam Brody, trying to stay drunk while he wearies of the family traditions, Henry Czerny is superb as the patriarch of the family, and Andie MacDowell is amusingly unfazed by anything that happens. Her role may be a relatively small one, but it's her best in some time.

What works here is the commitment to lining up the gory surprises as people are killed off, one by one, some of them directly involved in the whole scheme and some of them just "innocent" bystanders. Plenty of blood is spattered over people, with most of it ending up on Weaving, and there's a nice balance of moments to make you wince and moments to make you laugh aloud, but I would once again emphasise that it all seems to work as well as it does thanks to the direction and the way the main players sell it.

A good time is guaranteed for most genre fans, but if you have cast your net far and wide in the past year then I'll be very surprised if this ends up as your absolute favourite horror of 2019. It might even be struggling to get into a Top 5 for some voracious cinephiles. 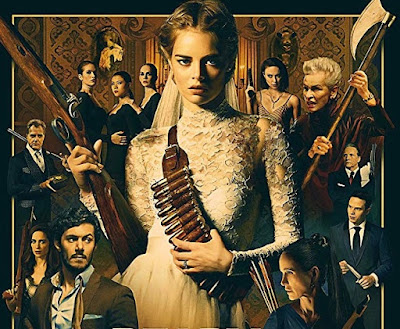