N.B. This review has been updated since more information has become available, including the fact that over here in the UK the movie was eventually released as Paranormal Entity 3: The Exorcist Tapes.

It's another rip-off from The Asylum, this time trying to mix The Exorcism Of Emily Rose with The Exorcist with The Last Exorcism, and it's another one of their better outings, though not actually a great film.

Much like Paranormal Entity (their rip-off of Paranormal Activity), this movie works because the central concept is pretty solid. It's simply showing an exorcism from footage that the film claims is real. Doctors argue with priests and try to get to the root of the problem as young Anneliese gets worse and worse and things get increasingly dangerous for everyone involved.

I had a quick browse around for information on this movie and couldn't find anything. Not. One. Thing.

Even on the website for The Asylum itself there are no cast or crew members listed and  I can only come to the conclusion that they think people in the big wide world will actually believe that the footage shown is real.

Some of the events depicted almost get into scary territory (the lead actress, Nikki Muller, playing Anneliese does her best with the physical side of things and there's a moment of genuine creepiness near the end with Anneliese moving out of a wheelchair to terrorise someone) but things are undermined by the bad acting from the majority of the cast and the terrible German accents.

Without enough detail and authenticity to actually convince as a "real" event, the movie has no major selling point. It also gets quite dull in places because of the many scenes featuring just black backgrounds with actual audio from the real exorcism being played over the top (which you can listen to on YouTube if you're interested) and the many other scenes focusing on nothing more than the priests and doctors arguing over the best way to treat Anneliese. But at least the lo-fi approach helps to gloss over the usual gamut of failings that The Asylum movies usually provide. 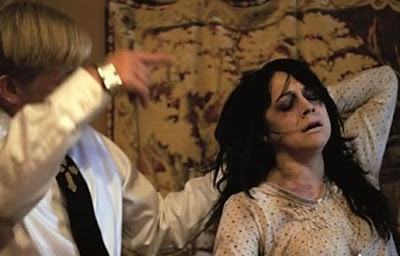