Gone Girl is a good film. At times it's a very good film. It also turns out to be the weakest one yet from director David Fincher. It's as if the opportunity to direct this came along when he wanted to coast slightly, matching his style and meticulous craftmanship to material that never really seems to deserve it. This is, let's be honest here, daytime TV movie stuff, given some added spice and edge to make it more of a talking point.

Ben Affleck plays Nick Dunne, the husband who goes home one day to find that his wife (Amy, played by Rosamund Pike) has gone. He calls in the police, and soon finds that he is the main subject of their investigation. As the evidence starts to pile up against him, Nick begins his own investigation. And he starts to suspect that perhaps he didn't really know his wife at all.

Written by Gillian Flynn, adapting her novel for the big screen, this is a film that seems to think it's always one step ahead of the viewer. It's not. Yes, there are one or two moments that will wrong-foot those wondering whether they are watching a real version of events, or something created by either of the main characters, but even those moments are easy to dismiss if you pay close enough attention to what's going on. There are a couple of BIG shocks, I guess, but even those are so heavily signposted that their impact is sorely muted.

Thankfully, none of the weaknesses in the source material cause any problems to the cast. Pike and Affleck deliver two fantastic performances, with the former able to enjoy a real variety of roles (depending on how she is being viewed by others) and the latter making the best use yet of that certain smug quality his detractors often accuse him of having. I've never had a problem with Affleck, but even those who tend to dislike what they view as his persona may end up liking his turn here, seeing him turn on charm for the sake of cameras and crowds while constantly having a large finger of suspicion pointed in his direction. Kim Dickens is great as the cop determined to crack the case, and Patrick Fugit tries his best alongside her, despite the fact that he seems trapped in a state of perpetual adolescence. Carrie Coon is the twin sister of Affleck's character, and very good she is in her role, Tyler Perry impresses as a hotshot lawyer willing to act in defence of a man who is starting to look guilty as sin, Neil Patrick Harris is an ex-lover who may or may not have information, and both Sela Ward and Missi Pyle have fun playing two TV celebrities, both with differing approaches but the same aim.

There's also the bonus of having Fincher at the helm, even if he IS on auto-pilot (or so it seems). The cool colour palette, the music by Trent Reznor and Atticus Ross, the slow and steady camerawork, the pitch-black humour. I seem to spend half of my time saying that familiarity breeds contempt with the other half of my time appearing to be a bloody hypocrite when I say that familiarity can often be an easy, comforting layer used in movies. This movie falls in to the latter camp.

It's not often that a film can overcome weak source material. This one manages it. But there's only so much that can be done, which is why it ends up being merely a good film, as opposed to a great one. 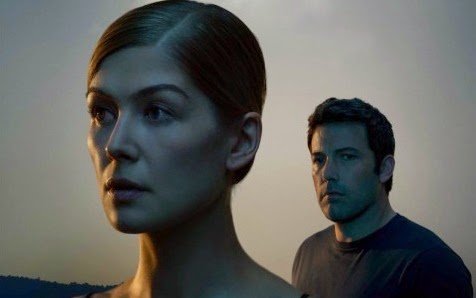