Rachel Melvin, Cortney Palm and Lexi Atkins are three girls named, respectively, Mary, Zoe and Jenn. They're about to spend a weekend in a cabin in the middle of nowhere. Originally envisioned as a weekend of sun, swimming and sex, the plan was changed to exclude any boys after Mary discovered that her boyfriend (Sam, played by Hutch Dano) had been photographed fooling around with some other girl. The boys turn up anyway, of course, with Buck (Peter Gilroy) unable to keep away from Zoe for too long, and Tommy (Jake Weary) easily persuaded to take a trip that will allow him to snuggle up with his partner, Jenn. Unfortunately, the plans they have for the weekend are about to be interrupted by some beavers that have taken a turn for the worse. Hence the title.

When I first saw the trailer for Zombeavers I assumed that it was a joke. A lot of people did. The idea was so ridiculous that nobody could seriously make it into a movie, right? Well, that's exactly the point of the film. It IS ridiculous. And sometimes it's also hilarious.

Fair play to the cast for all going along with the humour of the film. Melvin, Palm and Atkins are three attractive young women who have to keep straight faces once the beaver terror is revealed. Palm is also responsible for any gratuitous nudity, which I'm sure the target demographic audience will be thankful for (and as I'm in that demographic, at least in terms of mental age, I know this to be true). Weary, Dano and Gilroy are all a bit harder to like, but that's not a big problem when everyone onscreen is potential beaver fodder anyway. Rex Linn is a local hunter who looks like he might at least have some decent weaponry to hand, Phyllis Katz and Brent Briscoe are the old couple living in the house nearest to the cabin. They are the only other people within a reasonable distance so you just know that they're also going to run in to some beaver bother. And both John Mayer and Bill Burr provide some laughs playing a couple of guys in a truck who inadvertently cause the whole mess.

The script, by director Jordan Rubin, Al Kaplan and Jon Kaplan, is full of fun lines, references to other movies and a thin coating of self-awareness, and the direction is on a par with any other teen-oriented horror or comedy you can think of. The soundtrack isn't exactly full of great tunes, but that's easily forgotten when you get to the fantastic song that plays over the end credits. Special effects vary from the great (a nasty transformation sequence) to the endearingly silly (the beavers themselves). Other small delights include a nicely animated opening credits sequence, one or two ingenious sight gags, and a final scene that ties in hilariously with the very first scene.

If you choose to watch Zombeavers and end up disappointed then I will be very surprised. Not that it's a GREAT film, by any means, but it certainly doesn't sell itself as anything other than the silly, blood-soaked comedy that it is. 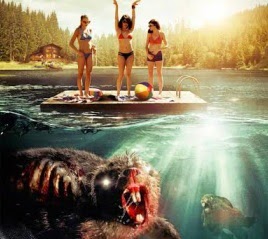