Written and directed by stars Jemaine Clement and Taika Waititi, this is a film that mixes obvious jokes with more inventive moments, utilising some great FX work to not only create great gags, but also ensure that the horror element is also genuinely horrific at times.

Waititi is Viago, one of four vampires living in a house together. Viago is the guy who arranges the house meetings and worries about everyone keeping a normal home, despite their abnormal lifestyles. Clement is Vladislav, a once-legendary vampire who has lost his mojo in recent years. Jonathan Brugh is Deacon, the coolest of the bunch, and Ben Fransham is Petyr, an ancient nosferatu type. The four become five when a young man (Cori Gonzalez-Macuer) is turned and this newcomer changes the whole dynamic of the group, highlighting the need to adapt to life in the 21st century.

There are so many great moments here that it's hard to know where to begin. This is the kind of film that leaves you mentally picking out highlights as soon as the end credits roll: an encounter with some werewolves (NOT swear-wolves), an attempt to drain blood from someone without getting too much on the furniture, a shaming ceremony conducted when someone is ostracised from the group. These are just a few of the moments that will make you laugh.

It's also worth noting, however, that this is not for the squeamish. There are some impressive displays of bloodletting, and one or two moments that you could easily class as the stuff of nightmares. If you were faint-hearted enough.

The acting from everyone involved is perfectly suited to the material. All of the main vampires may be slightly over the top, but that isn't a problem. Waititi, Clement, Brugh, and even Fransham (as mute as his performance is) are all playing specific types of people/vampires. Gonzalez-Macuer is very much an interloper, a tourist not familiar with the ways of the locals. Stuart Rutherford is wonderful as a human who becomes a friend to the vampires, Jackie van Beek is also great as a familiar growing impatient as she anticipates being turned by Deacon, and Rhys Darby raises quite a few laughs as the alpha male lycanthrope trying to keep his pack members calm.

A real treat, thoroughly deserving of all the compliments that it's received in the past few months, What We Do In The Shadows has big laughs, a surprisingly big heart, and some big arterial spray mishaps. 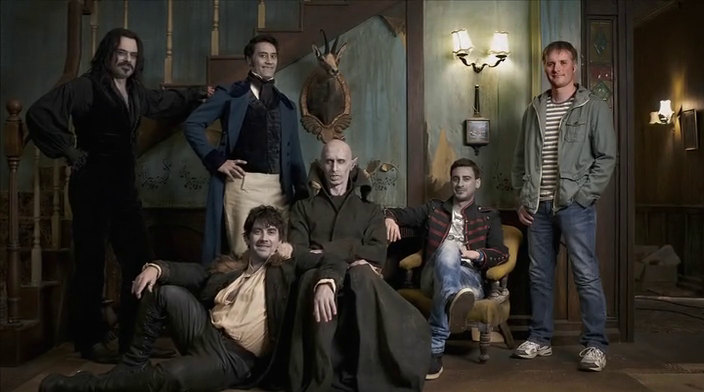