I'm pretty sure that if Denzel Washington and Liam Neeson ever starred in a movie together then every criminal on the planet would either be dead, dying or fleeing to outer space to escape their fate. These two men have kicked more ass in the latter portion of their careers than most younger stars do in their entire filmographies. And I, for one, am happy to see it.

Anyway, forget about Liam Neeson now. He's not in this film. This is a vehicle for Denzel, and what a great vehicle it is. Updating a popular TV show from the 1980s, director Antoine Fuqua reunites with his Training Day star to deliver an immensely entertaining tale of vigilante justice.

Washington plays Robert McCall, a quiet, kind man with a secret past. He works in a DIY store, he likes to read books, and he often heads out to a local diner for a cup of tea when he can't settle down for the evening. This diner also has a regular patron in the shape of a young prostitute named Teri (Chloe Grace Moretz). Teri dreams of becoming a singer one day, and McCall encourages her to keep striving to make that dream a reality. That becomes a lot harder to do when Teri is hospitalised after being beaten by her boss. Which is when McCall realises that he needs to step up and try to make things right. He's civil at first, but when that civility is thrown back in his face he replies in the only language that these people seem to understand. Violence and death.

Although it runs for a little over two hours, The Equalizer is not a film that feels bloated. The few main characters are set up nicely, the action set-pieces deliver plenty of impressive pain and bloodshed, and there's a lot of fun to be had in watching McCall resign himself to the fact that what he does best involves punishing criminals who have managed to evade the long arm of the law.

Denzel is excellent in the lead role. Some may feel that he's simply repeating the performance he gave in Man On Fire, but I prefer his work here. It's more fun to watch him move between two different personas, and the editing and other technical aspects are much better, complementing rather than obfuscating the acting on display. Moretz does just fine in her role, even if it is the pretty standard "young innocent in trouble/hooker with a good heart" that we've seen many times before. Marton Csokas is an entertaining, ruthless villain, and David Harbour does well as his temporary right hand man. Johnny Skourtis should win over most viewers as Ralphie, a man being helped by McCall to lose weight and pass the fitness test required for a security guard job that he's keen to land. There are also a couple of good cameos that I won't spoil here, although I am still sorry that we never heard an updated version of the classic TV show theme tune.

The script by Richard Wenk is well put together - having McCall work in a DIY store is a stroke of genius (okay, I might be overstating it, but it's a very good move) - and it's nice to see the film take the time to properly establish all of the main characters, even if some of their moments are cliched and slightly cheesy.

Fuqua manages to keep everything tense and visceral, handling the material with ease. Those with weak stomachs may find some of the violence a bit strong, but I think Fuqua knows his audience well and pitches the nastier moments at just the right level. The action is shot in a way that makes it cool, admittedly, yet it also constantly reminds viewers of just how quickly McCall gets himself into situations that are very, VERY dangerous.

The film covers a lot of familiar ground, yet it doesn't feel lazy or stale. And it has an embarrassment of riches when it comes to fan-pleasing Denzel moments. Not quite as good as the TV show I was so fond of (and, yes, I have my rose-tinted nostalgia glasses on), this does end up being a surprisingly close contender. Dare I say that it's . . . . . . . . . . . almost its equal. 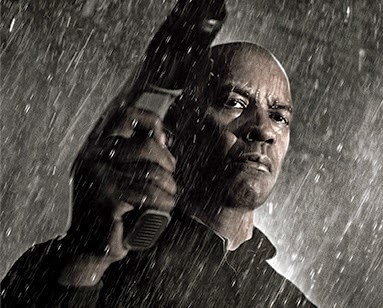