When Ghostbusters II was released in 1989 it did solid business at the box office. You wouldn't think that nowadays, with the way many people deride it and claim that it's a completely unworthy sequel to the classic first movie. Well, the first movie is a classic. I completely agree with that and already praised it here. What I don't agree with is the opinion that this sequel is completely unworthy. It's not as good as the first movie but few films are. It is, however, a very enjoyable film that picks up some years after the events of the first movie and allows viewers to find out just what the main characters have been up to since their big battle with Gozer.

And just what have the Ghostbusters been up to since saving New York City and, indeed, the world? Well, they were sued by a number of city and state agencies and the brand became worthless. Ray (Dan Aykroyd) and Winston (Ernie Hudson) are trying to keep the Ghostbusters name out there by entertaining ungrateful children at birthday parties, Egon (Harold Ramis) is conducting scientific studies with his usual, detached demeanour and Venkman (Bill Murray) is hosting a paranormal chat show. Dana Barrett (Sigourney Weaver) has a son and is enjoying the time that she spends helping to restore paintings under the watchful eye of Dr. Janosz Poha (Peter MacNicol). There's one painting in particular, of a nasty man called Vigo (Wilhelm Von Homburg) that starts to cause no small amount of trouble and so the gang need to get back together and get back to doing what they do best.

The baddie may not be as memorable this time around and there's no denying that the movie doesn't feel as fresh as the first film (but sequels rarely do, by definition) but there's a hell of a lot here to enjoy and anyone dismissing this movie completely is, I'd say, being very harsh.

Murray, Aykroyd, Ramis and Hudson are all still great in their ghostbusting roles, Weaver plays off them all very well once again and Annie Potts and Rick Moranis return to reprise their memorable characters. Peter MacNicol is also good fun and Wilhelm Von Homburg keeps his mean face on throughout. Kurt Fuller may not be able to replace the great William Atherton as the main jerk of the movie but he tries his best. David Margulies returns to play the Mayor of New York and Harris Yulin has a small, fun role as a very strict judge who ends up seeing the Ghostbusters on trial in his court.

With Aykroyd and Ramis also returning to their writing duties and Ivan Reitman once again directing the action, this is very much the kind of sequel that feels like audiences are getting to catch up with some old friends. Because that's exactly what it is. I will watch Ghostbusters any number of times and never tire of it but this second outing is almost as rewatchable and has a smattering of great lines in almost every scene. The ending is a bit of a letdown but I think that any ending would have been slightly underwhelming compared to the brilliance of that big finale of the first movie featuring Gozer and The Traveller.

Oh, okay, there's also a pretty lame soundtrack compared to the complete '80s greatness of the first movie but that's the only other major complaint I have.

If you haven't seen it in a while then do give it a go and you might just find that the Ghostbusters are still the guys to call when you want some ectoplasmic entertainment. 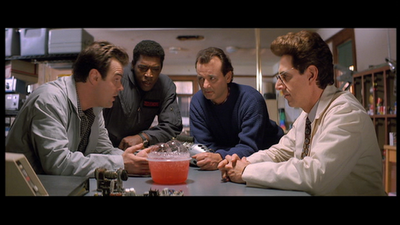