Used car salesmen have long been the source of mirth on the big screen, on the small screen and in other forms of entertainment. They're all fast talkers in cheap suits with a smooth style that lasts right up until the time someone drives a purchased car off the forecourt. Or so many of us assume.

Kurt Russell stars in this comedy that contains plenty of used cars and he's the fastest talking salesman with the smoothest style that you could possibly imagine. I'm not sure if he wears the cheapest suits but he's the ultimate used car salesman. Sadly, there's trouble on the horizon as his boss, Luke Fuchs (Jack Warden), is harassed so much by his brother, Roy L Fuchs (also Jack Warden), who owns the competing lot across the road that he ends up dying. The salesmen (Russell, Gerrit Graham and Frank McRae, a mechanic who is roped into things) can't let anyone know that their boss has died so they start to enjoy a new-found freedom and try more and more outrageous stunts to get customers trying out their cars. An extra complication arises when the estranged daughter of Luke, Barbara Jane Fuchs (Deborah Harmon), turns up and wants to catch up with her father.

Directed by Robert Zemeckis, who also co-wrote the screenplay with Bob Gale, Used Cars is a lot of fun from start to finish. The script is full of great lines, the pacing is perfect and the finale is actually as wildly entertaining as it is pretty ridiculous. There are also some fantastic stunts in the mix as a huge number of cars are driven from a to b while Roy L. Fuchs tries to stop them reaching their destination.

The cast is great. In fact, Russell in the lead role makes everything feel like a Disney movie aimed at adults. It doesn't require the biggest stretch of the imagination to think of his character, 'Rudy' Russo, as an adult incarnation of Dexter Riley. Gerrit Graham and Frank McRae are both a lot of fun, with the former playing a character who is obsessed with superstition. Jack Warden is always good to watch and in this film . . . . . . . he's good to watch. Deborah Harmon is an enjoyable female presence and holds her own admirably amidst the predominantly male cast. Al Lewis, best known to many as Grandpa Munster, is excellent as Judge H. H. Harrison (AKA "Hanging" Judge Harrison). Joe Flaherty and Michael McKean have small, fun roles and fans of Dick Miller may want to keep their eyes peeled - he appears for a second or two, billed as Man In Bed.

Used Car isn't quite as good as some other movies that focus on similiar characters (Tin Men being the first, and one of the best, to spring to mind) but it's consistently amusing and makes the most of a great cast, headed by the charming and silver-tongued Russell. 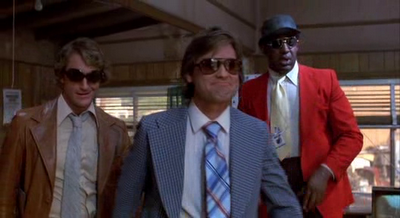