The Revenge Of Frankenstein (1958)

Following on from The Curse Of Frankenstein, and with the three main players back for more (Terence Fisher directing, Jimmy Sangster writing - with additional dialogue from Hurford Janes and an uncredited George Baxt - and the irreplaceable Peter Cushing as the Baron) we get a lot of familiar fun in this Hammer horror movie.

Taken to the guillotine for the deaths that resulted from his handiwork in the previous movie, Baron Frankenstein stages a sneaky escape and sets himself up in practice far away in an area where he hopes not to be recognised. He even completely changes his name to Doctor Victor Stein. However did he think that one up? The bad news is that he is recognised by someone but the good news is that the person who recognises him wants to help him carry on his scientific work. The venue may have changed but the song remains the same as Frankenstein and his new assistant (Doctor Hans Kleve, played by Francis Matthews) set about to take the brain of trusty Karl (Michael Gwynn) and place it in a superior body. Let's just hope that nothing happens to knock the brain while it's adjusting to it's new home as that could lead to madness, murder and cannibalism. But I'm sure nothing will disturb the Baron's good work. Aren't you?

Cushing is as great as ever in this film with Baron Frankenstein being, arguably, his greatest characterisation. The mix of superiority, charm, intelligence and arrogance so superbly moulded into one of the most likable rogues in horror movie history is a result of both the great writing and Cushing's own delivery of the material. Matthews is very good as the eager assistant who shares Frankenstein's progressive thinking and Gwynn is very good, whether playing a damaged human being or a damaged experiment gone awry. Eunice Gayson is the lady unwittingly endangering herself this time around and she does fine with her role. Michael Ripper fans will be pleased to see the actor in a small role (his first for Hammer) and George Woodbridge is either amusing or annoying, depending on how you react to his character.

Full of many moments of black humour, as most of the Frankenstein movies are (the subject matter seems to practically beg for it), the film is a swift, entertaining romp that may not really scare anyone but that does have one or two shocking moments here and there en route to it's enjoyable final scene, a fun if implausible punchline that will hopefully make viewers smile as opposed to scowl. 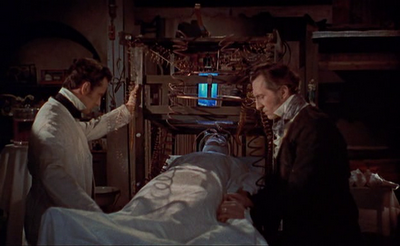