In a post-apocalyptic world, one man wanders through the desert with a sharp sword, a courageous heart and the capacity for kindness. And he meditates while doing headstands. That wandering warrior is Patrick Swayze.

Yes, Steel Dawn is one of many sci-fi movies that go for the cheap 'n' cheerful approach and it's an enjoyable slice of cheese, mainly thanks to the cast. The story is familiar to anyone who has seen this kind of movie before (and, if you grew up in the '80s then you've probably seen loads of them). The wandering warrior eventually encounters a settlement and helps them out for a while. He quickly finds out that they're being troubled by the henchmen of a nasty man who wants their water supply. The warrior causes some trouble and the nasty man gets even nastier.

Patrick Swayze is very good in the main role but he's not the only Swayze onscreen, with the part of Kasha being played by his wife, Lisa Niemi Swayze. I assume that director Lance Hool didn't mind the husband and wife team because there's also a very young character played by Brett Hool AKA his son. But the real fun begins when the great Brion James appears onscreen. Seeing that the main villain is played by Anthony Zerbe is a big bonus but even he is outshone by the performance of Christopher Neame, playing a hired killer who admires Swayze as his worthiest opponent yet. There's also Arnold Vosloo having fun in a relatively small role.

The script by Doug Lefler is sparse but that's probably a good thing, with most of the dialogue that is present being either laughably bad or just trying too hard to invest the hokum with a sense of seriousness. Lance Hool doesn't do anything special but he keeps things moving along well enough and manages to keep boredom at bay even during the more sedate first half.

It's no classic of the post-apocalyptic subgenre but, thanks to the selection of great actors onscreen and the winning lead performance from Patrick Swayze, it's a fun film for fans of the people involved. 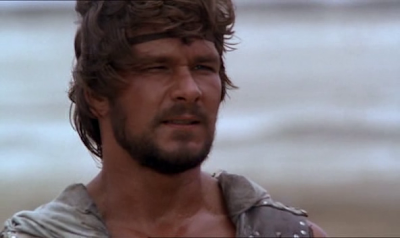