The last of the collaborations between director Carl Reiner and actor Steve Martin, All Of Me is almost as good as any of their previous efforts and holds up as yet another hugely entertaining piece of inspired lunacy from the two men.

The plot of the story is as ridiculous as it is loaded with comic potential. Martin plays Roger Cobb, a lawyer who wants to take his career to the next level. As a bit of a test, he is asked to handle the affairs of Edwina Cutwater (Lily Tomlin). Miss Cutwater is dying, but she has a plan to live on. As she shuffles off the mortal coil, she will have her soul placed in a bowl and then transferred into the body of the lovely, young Terry Hopkins (Victoria Tennant). Roger Cobb finds this idea insane, but it all proves most troublesome when things go wrong and the soul of Miss Cutwater doesn't get to Terry. The bowl is instead knocked out of an open window and lands on . . . . . . . . . . . yes, Roger. When he comes to he soon realises that something is amiss (no pun intended). His body is not entirely his own. The man and the woman will have to work together in the same body to fix the situation, preferably before Roger loses his girlfriend and his job.

The script, written by Phil Alden Robinson and adapted by Henry Olek, from the novel by Edwin Davis, is full of great lines and great characters, but most of the praise has to go to Martin for his physical performance. His turn here holds up, in my opinion, as one of the best physical performances in the modern comedy genre. Tomlin may be heard more than seen, but she's on good form as the spoilt, tired woman who is used to getting everything just how she wants it. Then there's Victoria Tennant. She's okay, nothing more and nothing less. Jason Bernard is great fun as a blind musician who is also a good friend to Martin's character, Dana Elcar is a lot of fun as Martin's boss and Richard Libertini is amusing and sweet as Prahka Lasa, the man with the power to transfer souls into different receptacles.

Reiner keeps things moving along nicely, there's a decent soundtrack (including some nice use of the titular track), and one or two big set-pieces make up for the fact that the script may not be as sharp as their previous works. Well worth your time. 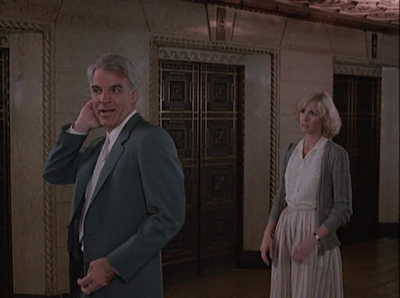