A psychological thriller by Jimmy Sangster, Fear In The Night is yet another in the long line of Hammer movies often overlooked by fans of their horror movies featuring the archetypes of the genre. I was looking forward to seeing this one, not expecting anything great as I had heard nothing about it beforehand, but I was definitely intrigued.

The plot sees young Peggy (Judy Geeson), recently recovered from a nervous breakdown, joining her husband (Ralph Bates) on the grounds of the school where he works. The school is presided over by Michael Carmichael (the ever-watchable Peter Cushing), who stays there with his wife (Joan Collins). As fragile as she is, Peggy is made even worse when attacked by a mystery assailant. And the worst thing is that nobody will believe her, simply putting it down to recovering, shaky nerves.

While it's not a very remarkable entry into the psychological thriller subgenre, this movie does a number of things quite well. Geeson gives a decent performance as the young, nervous, often child-like, wife. Bates is solid and Collins is pretty good. Cushing is, it goes without saying, great. Before the twists and turns start to occur the pacing of the film also works just fine, drawing you into a mysterious atmosphere of unease and doubt while flagging up some, admittedly easy to spot, future plot developments.

It's also surprisingly bleak in places, rather nihilistic and hopeless for a Hammer movie - another point worth noting and another aspect that impresses when weighed against many other films released by the studio.

Sangster is a better writer (he co-wrote this screenplay with Michael Syson) than he is director, from what I have seen of his work, but he's capable enough and frames his material adequately, if nothing else. Fear In The Night ends up as a movie worth seeing, though perhaps not worth seeking out ahead of many other psychological thrillers you could give your time to. 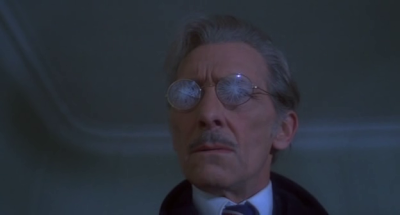