Based on a stage musical that was based on the original 1960 film, Little Shop Of Horrors (a Roger Corman movie most famous for being shot in only two days), this black comedy features a great cast belting out some great tunes in between some memorable set-pieces.

Rick Moranis plays Seymour Krelborn, a young man working in a flower shop owned by the needy and greedy Mr. Mushnik (Vincent Gardenia). The fortunes of both the store and Seymour start to look better when he discovers a new type of plant, a plant that he names Audrey II, after the woman he works alongside (played by Ellen Greene). Unfortunately, the upturn in fortune comes at a price. Audrey II (voiced by Levi Stubbs, of The Four Tops) doesn't grow or flourish unless it's given a very specific diet. A diet of blood.

Directed by Frank Oz, with a screenplay by Howard Ashman (who also worked on creating the songs with Alan Menken), Little Shop Of Horrors is a near-perfect package of comedy, thrills and genuinely enjoyable songs to sing along to. Like almost any musical, there are some that are better than others, but songs like "Skid Row", "Da-Doo", "Grow For Me", "Some Fun Now", "Dentist" (which remains my personal favourite), "Feed Me (Git It)" and "Mean Green Mother From Outer Space" are so strong that they make up for any of the slightly weaker numbers. Unlike most musicals, however, there isn't one song that I would consider bad. That's as much thanks to the execution of the material as it is thanks to the lyrics and musicality of each number.

Moranis is as good as he usually is in the main role, no stranger to playing a kind-hearted chump, and Gardenia and Greene are both perfect for their characters, with the latter especially enjoyable as a sweet blonde bombshell stuck in an abusive relationship with her dentist boyfriend (Steve Martin, almost stealing the entire movie with his hilarious scenes). Levi Stubbs has a superb voice to use for Audrey II and the plant at the centre of all the attention is brilliantly made real, thanks to the audio mixed with some superb practical effects work. You'll buy into it the scenario very quickly, despite the artificiality and ridiculousness of the whole thing.

John Candy, Billl Murray, Christopher Guest and James Belushi all turn up in very enjoyable cameo roles, and it would be remiss of me not to mention Crystal (Tichina Arnold), Ronette (Michelle Weeks) and Chiffon (Tisha Campbell) - the three women, named after classic girl groups from the '50s and '60s, who provide a number of the main songs and most of the backing vocals.

Despite the technical specs, this version will apparently play on all players - http://www.amazon.co.uk/Little-Shop-Horrors-Directors-Blu-ray/dp/B008AT71WI/ref=sr_1_3?ie=UTF8&qid=1376906613&sr=8-3&keywords=little+shop+of+horrors 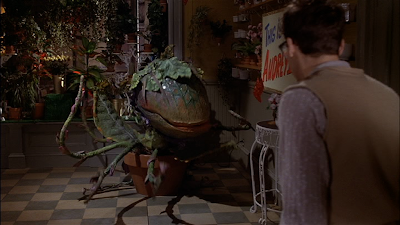