Having enjoyed a lot of the stop-motion work from Arthur Rankin Jr and Jules Bass, I was delighted when I found out that they'd given people an adaptation of The Hobbit back in the 1970s. Unfortunately, that delight started to ebb away not too far into the movie.

The tale will already be familiar to many, either from the book or from the oversized Peter Jackson take on the material. Bilbo Baggins (voiced by Orson Bean) is a hobbit, and his life is changed forever when a wizard named Gandalf (John Huston) comes to his door and teams him up with a group of dwarves who are on a quest to retrieve some treasure from a mighty dragon named Smaug (Richard Boone).

There are some great names attached to this vocal cast. As well as Huston, viewers are treated to the voices of Otto Preminger and Hans Conried. Unfortunately, no collection of names could make up for the lacklustre animation and the poor script, by Romeo Muller. With a story this great, there's really no excuse for such a clumsy adaptation. Yes, there are some direct quotes lifted from the book, but that doesn't make up for the many other changes that crop up in almost every scene. I understand that this was aimed at a young audience, so simplifying/sanitising certain plot points is something I could understand. The unnecessary change, however, to that enjoyable moment when Gandalf has to help stop some trolls from eating the travelling group is one shining example of a bad decision made without any good reason. But watch the film and you will see many others.

I'll admit that I was also disappointed as soon as I saw that this wasn't a stop-motion affair. That is, after all, how I came to know Rankin/Bass, it's a trademark of their most enduring works. My disappointment could have been tempered by fine artwork made with hard work and a lot of heart, but this is quite an ugly piece of work. Yes, it's a TV movie, but it doesn't need to feel like one. And a cheap one, at that.

The good news is that most of the big scenes are included. Those trolls at least provide a threat, goblins also cause some trouble, Gollum takes on Bilbo in a battle of riddles, big spiders go around being all horribly eight-legged and . . . . . . .  far too big, and there's the mighty Smaug himself, of course. Whatever the presentation, these moments are always a treat to watch and that is why the film stays below average, without being completely unwatchable.

As much as I hate to say it, this is one Rankin Bass outing that just isn't worth bothering with. If you do give it your time then you can try to enjoy it, but deep down you might just start thinking about how you could have been rewatching Mad Monster Party. 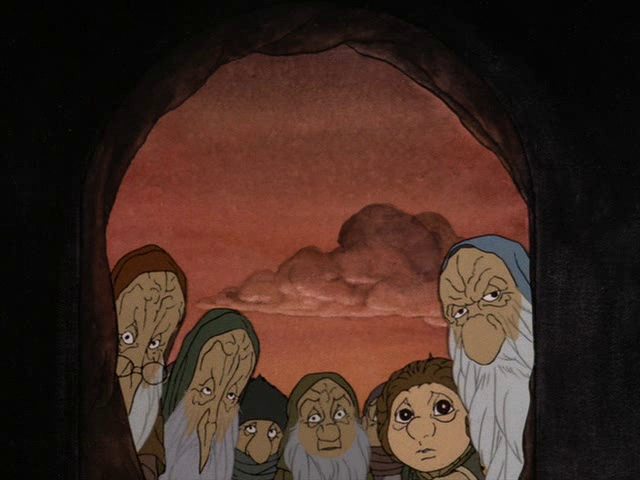