Alligator X is a creature feature that suffers from an uninteresting cast, an unexciting plot and, worst of all, a poor central creature. It's yet another in a long line of inferior SyFy Channel (note: I'm not sure if they commissioned it or just distributed it in some territories), which should tell you all you need to know right there.

Mark Sheppard plays Dr. Charles LeBlanc, a man who may very well be meddling with mother nature, and we all know how badly that tends to end. He arrives back in town, or the swampland that has some houses in the immediate vicinity, to upset his ex, Laura Le Crois (played by Elena Lyons), and be firmly in the frame when a large predator starts munching on some locals. The latter is just an unfortunate coincidence. Or is it?

The flat direction by Amir Valinia isn't all that surprising. This is, after all, standard, low-budget, creature feature stuff and does the bare minimum required for such a film. What is surprising is that the script by Cameron Larson was the result of a story that four people collaborated on. Four people? To come up with this nonsense?

The special effects are poor, although I've seen a LOT worse in this kind of movie (faint praise though that may be), and the main story strand is a weak excuse to avoid more actual time with the creature onscreen, but that doesn't make it  less deserving of your time than the 1001 other z-grade creature features vying for your time.

As for the cast, Sheppard is good fun as the cocky doctor, Lyons is spirited and enjoyable enough as the woman who has fought hard to keep her life together, Lochlyn Munro is a familiar face I never mind seeing and does fine with his role as a local Sheriff, Ricky Wayne and Scott L. Schwartz liven things up whenever their incompetence is onscreen, and everyone else does what's required.

This isn't rocket science. It's a film about a giant predator in a swamp. If you like that sort of thing then check out the surprisingly good Frankenfish. If you've nothing else to hand then check out this one. If you feel that you must. 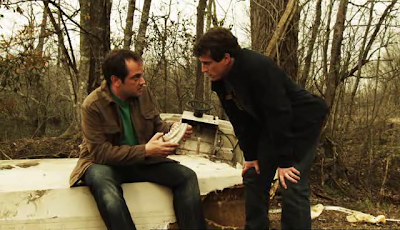