A meteorite lands beside a college that is pretending to be in the USA and an alien starts running around, causing lots of damage. The meteorite also brought a woman (Kadamba Simmons), who then starts to run around and act all mysterious. Is the woman helping the alien or is she in trouble? Meanwhile, Samantha Womack (nee Janus) starts to get a bit jiggy with her tutor, Ashley (Todd Jensen), while the bodycount starts to rise and the other female students are put in mortal danger.

It's not all that uncommon for movies made in the UK to pass themselves off as movies set in the USA, or elsewhere. We have a variety of great locations that director are more than happy to pass off as any location they can. It is, however, slightly less common to have UK movies full of UK actors all trying to pass themselves off as standard Americans. The results range from the endearing (Slaughter High) to the annoying (Red Mist) to the laughably awful (this movie).

Paul Matthews is the man who wrote and directed the film, and I can only imagine how much fun it is to be inside his mind. The plot is ridiculous, the characterisations are awful, the special effects are ropey (but enjoyably so) and the acting is woeful from everyone involved.

Does anyone manage to come out of this with dignity intact? No. Samantha Womack is at least pretty, and happy to take part in scenes that get her shirt wet, but everyone else is either shockingly bad or shockingly dull. Simmons, Jensen and Oliver Tobias fall into the former category, while Melanie Walters and Clifton Lloyd Bryan fall into the latter category. The fact that Clifton Lloyd Bryan plays the space alien, the actor himself is unrecognisable under the rubber suit/practical effects that make up the character, means that he shouldn't be dull, but he still manages it. Yes, this is an alien movie in which even the alien is completely uninteresting.

I admit that if I'd been watching this under different circumstances I could have found it more entertaining. There's plenty here to laugh at so go ahead and bump up the rating if you're after something to amuse you while you accompany any viewing choice with beer and junk food. I'll continue to warn others away from it though. 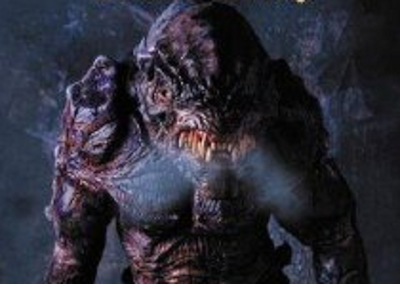