A lesser vampire movie from Hammer, this was written by Anthony Hinds and directed by Don Sharp. Neither of the men involved seem to be able to muster any enthusiasm for the material, or inject it with any energy, and that leaves the second-tier cast (only in terms of the Hammer pecking order) floundering.

Edward De Souza and Jennifer Daniel are honeymooners Gerald and Marianne Harcourt. When they experience a bit of car trouble near a small village in Europe they end up staying at the handy sort of inn that only ever seems to crop up in Hammer movies and also get themselves befriended by the sort of seemingly kind, curious nobles who only ever seem to crop up in Hammer movies. This particular well-to-do gentleman is Dr. Ravna (Noel Willman), who invites the Harcourts to spend some time with himself and his family before then inviting them to a big party. But that party is just a ruse. With Marianne in danger, Gerald ends up seeking help from a fellow lodger, the exasperated Professor Zimmer (Clifford Evans).

All of the usual ingredients are in place here. The upper class folk who succumb to the seduction of evil ways, the decent but scared couple running their inn, the embittered older character who knows the truth about the area and its inhabitants and the brave husband willing to risk his own life to save his darling wife.

I won't deny that there are a few moments here and there that I enjoyed, and one or two lines of dialogue that I was pleasantly surprised by, but this is material that has been spruced up and given far better treatment in a handful of other Hammer movies that you could choose from.

The cast put in acceptable performances, I guess, but it's only really Evans who stands out as someone worth spending time with and, indeed, rooting for. Support from Barry Warren, Isobel Black, Peter Madden and Vera Cook is in line with the rather flat nature of everything else in the movie.

I guess, like every other Hamer horror movie, that The Kiss Of The Vampire may have fans. I just can't see anything here that could appeal to anyone, excepting the most easily pleased viewer who may have somehow avoided many of their better outings before getting to this one. 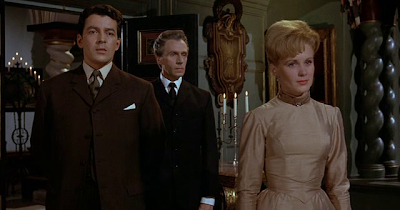