Hmmmmm, I am usually pretty good when it comes to reviewing movies while keeping things relatively spoiler-free. Decisions have to be made, of course, especially if the movie has been mis-sold, or is worth discussing in more detail because of what it brings to the table, as it were. But it's a delicate balancing act. Even mentioning a movie has a twist is resented by people who then spend the duration of a film watching out for a twist.

Game Over doesn't really have a twist, but it is worth mentioning that it takes a turn in the third act that rewards patient viewers. Will it elevate the film for you? I cannot say. All I can tell you is that I was enjoying the first hour or so while waiting to see if it would deliver anything more entertaining... and then it delivered something more entertaining. Whether you go along with it or not is entirely up to you.

Things start with a life being ended. A vicious murderer is on the loose. Viewers are then introduced to Swapna (Taapsee Pannu), who seems to have resigned herself to a different kind of end to her life. She plays videogames, doesn't seem to save any friends to prove a distraction, and is battling severe nychtophobia. She's also starting to be bothered by a tattoo she had done to display her love of gaming, as well as the not insignificant fact that she survived a traumatic attack, one that has been displayed online and leads to her being occasionally recognised.

Written by Kaavya Ramkumar and Ashwin Saravanan, who also directed it, Game Over may disappoint some people who like to think they know where it is heading from the earlier scenes. Those people may start plotting out their own movie, only to be thrown a curveball later on. Just be patient, trust in the skill of those involved, and you will be rewarded. The script puts everything in place nicely, and Saravanan directs with precision, leading viewers step by step towards that immensely enjoyable and satisfying third act.

Pannu is decent in the main role, especially when you consider that she's in almost every scene. Vinodhini Vaidyanathan plays the only other main character (a housekeeper/carer who shares her home), and also does well, while there are very brief portions of screentime allocated to characters such as a psychiatrist, a doctor, a murder victim, the victim's mother, and a security guard.

As much a look at the psychological impacts of hugely traumatic events as it is a tense thriller, this has some interesting points to make about gathering up the courage to keep fighting whatever life may throw at you, and how life doesn't necessarily always play fair (not at all). It also seems to suggest that maybe, just mayyyyyybe, you can offer abuse victims support while also allowing them to find their security/comfort/distraction any way they wish to, until they once again have the mindset and the strength to deal with whatever fate has in store for them. 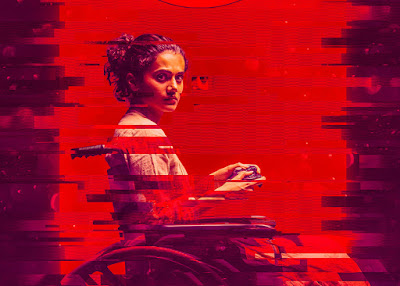