Okay, some may dismiss The Upside because it is a glossy Hollywood remake of The Intouchables, a film based on a true story that has already remade a few other times since being so widely praised when it was released back in 2011. That's a shame. While it's not as good as the original film, it's a sweet retelling of it, and manages to retain the essence easily enough (the unlikely friendship forged between the two main characters).

Kevin Hart plays Dell Scott, an ex-con who needs to find a job, although some of the interviews he turns up for are for jobs he has no interest in, so he usually just asks for a signature that he can show to his parole officer. When he ends up in the home of a wealthy quadriplegic, Philip (Bryan Cranston), he figures that he won't be right for the job, so he asks for a signature. Instead, Philip offers him a job. It pays well, but comes with a lot of responsibility. Philip likes Dell because he doesn't patronise or judge him, but his assistant (Yvonne, played by Nicole Kidman) isn't so sure about the decision. Yvonne tells Dell that he will be out after three strikes. Dell, meanwhile, starts to repair his broken relationship with his ex (Aja Naomi King) and his son (Jahi Di'Allo Winston).

Director Neil Burger is at the helm here, working from a script by Jon Hartmere (his first feature, essentially following the structure of the original and allowing the casting to do all of the lifting). Nobody behind the camera seems to have too hard time of it. The story is strong enough to hold up, and there isn't too much to change when it comes to the main plot elements. Nothing is radically overhauled and there's no added style to let you know who is providing this vision. It's simple, solid, movie-making.

Thankfully, the casting is the part that they got spot on. I tend to enjoy Hart in movies, even when his movies aren't that great, and Cranston is almost always excellent. The two work well within their comfort zones (alright, Cranston has the harder job, but is easily up to the task) and also, more importantly, work well alongside one another, believable as two very different individuals who complement one another as their friendship develops through good times and bad. Kidman has a slightly thankless role, yet she does well enough with what she's given. Both King and Winston do well as the people Hart has let down in the past, Tate Donovan is a lot of fun in his small role (a wary neighbour), and there's a great small turn from Julianna Margulies, although the main scene that she's involved in is a painful one.

I would always recommend that you watch The Intouchables first if you've heard of the story and it sounds like something that would interest you, the original remains the best, but this is a perfectly enjoyable retelling of the tale, thanks largely to the work done by the two leads. Sometimes you're in the mood for a wonderful, original movie. And sometimes you're in the mood for the glossy Hollywood remake. 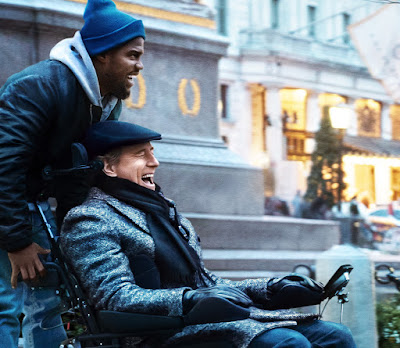