Ahhhhh, Sixteen Candles. It's a film I have very fond memories of. I have owned it on VHS, I have owned it on DVD, and now I own it on a shiny blu-ray. And others feel the same way. It's also one of the most problematic '80s teen movies that isn't focused on sex (those films are on a whole other level, and I'm not wanting to get into an argument about them at this time). I'll get into all that soon enough.

Let me start by saying that I can accept what Sixteen Candles is, just as much today as I did back when I first saw it in the 1980s. It is a teen film that speaks to a certain demographic of teens, and features a cast impressively made up of many actors who actually were at the same age as their characters. Molly Ringwald is decent in the lead role, Samantha, and the plot revolves around the devastating (when you're that age anyway) fact that her family have forgotten that it is her 16th birthday. They're all busy prepping for her big sister's wedding. Samantha also pines for older hunk, Jake Ryan (Michael Schoeffling), and has to fend off the attention of a young geek credited as Geek (Anthony Michael Hall). Although she doesn't know it yet, Jake has taken an interest in Samantha, although he's currently going out with the gorgeous and popular Caroline (Haviland Morris).

With a great soundtrack, decent performances from the main cast members (Hall has always been my favourite though, and I also love the silly performances we get from Gedde Watanabe, Joan Cusack, John Cusack, and even a number of the adult characters), and the standard moments of wish-fulfilment, this is a template-setting directorial debut for Hughes, who was largely responsible for the stardom of Molly Ringwald in this decade, as well as the chart success of a number of musicians featured on the soundtracks of his movies.

Sixteen Candles still makes me laugh, although I laugh less than I used to. It bounces along from one almost-surreal moment to the next with so much energy that it's almost hard to think too critically about it as it plays out. Much like any big party you attended while at high school, things take on a different hue when you are recovering after the main event.

So let's discuss the problems with Sixteen Candles, problems that seem way more obvious now, but should also have been pretty obvious when it was first released.

A lot of people mention the fact that Jake is willing to give away his drunken girlfriend as if she's a) just a piece of his property he no longer has any use for, and b) deserving of whatever happens because of her drunken state and sexual confidence. They also mention the cringe-inducing inclusion of an Asian character named Long Duk Dong (name often accompanied by a gong sound, yes . . . a gong sound). The horribly inappropriate grandparents, the horny geek who won't take no for an answer, you've probably heard about these problems already. There are other problems though, some that we are perhaps only more attuned to nowadays. Like the following exchange -

Randy: And a big Trans Am in the driveway with a ribbon around it. And some incredible gorgeous guy that you meet like in France. And you do it on a cloud without getting pregnant or herpes.
Samantha: I don't need a cloud.
Randy: Just a pink dress and the guy, right?
Samantha: A black one.
Randy: A black guy?
Samantha: A black Trans Am, a pink guy.

That may look light and amusing enough,  but watch the film and the shock of Randy when she thinks her friend is on about "a black guy" and it just feels like an unnecessary reminder that writer-director John Hughes delivered films that were almost uniformly sliced up chunks of whiter-than-white Americana, no matter what bitter pill may have been slipped into some scenes. And that's not even mentioning the moment that has Jake Ryan gaslighting his girlfriend as he dances with her while thinking about Samantha.

It was always clear, I think, that Hughes was writing for a specific target audience. The lack of diversity in his cast (beyond class and clique archetypes) now sticks out like a sore thumb, although I am not sure I would ever want to hear him try to lend his voice to a central African American character. He wrote for those he felt he could identify with, or at least give a voice to.

Which is why, despite the problems, Hughes movies will always hold a special place in the hearts of those who discovered them at just the right age. As silly as it may seem, he wrote teen characters in the way we wanted them to be. They were very rarely realistic, or able to see beyond their own selfish problems that seemed huge, but there was a truth to the core of many of them. Because we always wanted to be better than our reality anyway, whether that means being the coolest rebel, the prettiest girl, the edgiest outcast, the nerdiest of the nerds, or any other pigeonhole we could fully inhabit and call our own. And when it comes to not being able to see beyond selfish problems that seem huge, that is most of our teenage years. Sadly, thanks to my arrested development, I think that lasted right up until my late twenties. I am glad that nobody was around to record the many conversations I used to have with friends when we thought we knew about love, life, sex, and heartbreak.

I've waffled on a bit more than I intended to, mainly because I didn't initially want to give as much time to addressing the aspects of the film that more enlightened modern viewers may take issue with. But I think it is important to remember that, taken as a whole, Hughes was trying to do something good, in giving teens their modern cinematic dream scenarios, and also giving young females a number of role models, even if they often ended up just wanting to end their school term with a perfect date/Prince Charming. We've moved on a lot since then, in many ways, but teenagers still spend an awful lot of time thinking about these things. We just forget how many hours in the day were spent dwelling on such issues, because we grew up and realised that our lives would more likely be directed by Mike Leigh than John Hughes.

You can buy the movie here (and the booklet and video essays are wonderful extras).
Americans can buy it here. 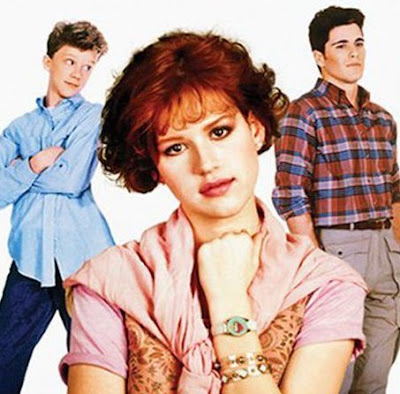