As intermittent as my blog posts/reviews have become lately, I was hoping that I would only pop up now and again to sing the praises of some lesser-known new release, or to just join in with the barrage of opinions that appear for every blockbuster (a la Terminator Genisys). Little did I realise that I would soon see a movie that would leave me compelled to warn others off it. A movie so horrible that I genuinely couldn't believe what I was watching at times (spoiler alert - and yet a certain degreee of technical competence still leads me to score it a generous 2/10). Midnight Sex Run is that movie.

I don't even know how it came to be on my radar. I had no idea what it was about. But you lucky people won't have to go in as blindly as I did.

The film starts with an animated sequence showing two kids bullying another kid at camp. One firecracker later and the bullied kid has no manhood. Fast forward a number of years and we meet Jordan and Ted (played by Jordan Kessler and Ted Beck, the two men who also wrote and directed this crap, with their obvious lack of imagination clearly displayed by the fact that they can't even create different names for themselves). Jordan and Ted don't seem to be having any luck with ladies, although a large part of that seems to stem from the fact that they're selfish assholes who don't deserve any female attention anyway. Yes, I get that this is all set up to show their journey throughout the movie as they potentially grow and develop, but I also get that, no, no it's not. Because they don't. Not really.

But I digress. Jordan and Ted have their fathers kidnapped by Jeff (Dave Shalansky) and his mother (Florence C. M. Klein). Jeff is the boy with no working penis now all grown up. He tells Jordan and Ted that their fathers will be safe IF they can sleep with ten different women in 24 hours. They must get proof on camera, and Jeff's mother even gives them a roofie each to help them along. Yes, if you're already squirming uncomfortably then you might know how I was feeling at this point.

And so begins the sex run portion of the movie, which takes up the majority of the runtime. Things start off slowly, but just as horrible as anything else to come, when the two guys try to get up close and personal with a nurse. The vibe is pretty rapey, there's no other way to put it, and I only hoped that things would turn around. They didn't. Because next on the list is a homeless person, a horrible, crazy woman that Ted tries to ply with booze and get hot 'n' heavy with. I won't cover every single episode in detail, but they're all very similar, with "highlights" including the use of the roofie on a sweet-hearted older woman, an attempt to win the heart of a woman first seen searching around in a dumpster, and an encounter with a comedienne that moves from supposedly-funny-but-just-disturbing daddy/daughter roleplay to hilarity involving an enema. And the finale is arguably even worse than anything I've yet mentioned.

Kessler and Beck seem reasonably okay as directors. They don't overstretch themselves, although they don't manage to hide the low budget either. But as writers and actors? Whoah, that's where the trouble lies. Now, MAYBE this premise could have been turned into something fun in the right hands. Maybe. But to make something this consistently unpleasant, and try to label it a comedy, shows that either those involved were incompetent, or nobody seemed to recall the big difference between good bad taste and bad bad taste.

Many viewers will be offended by this. I tend not to get offended. I just get angry when my time is wasted, especially by something so incredulously misjudged and misanthropic. 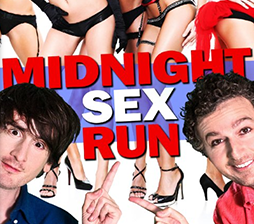