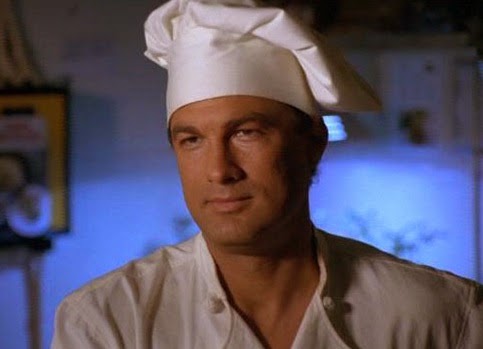 Posted by Tylerandjack at 16:07 No comments:

How could I have been so silly? I saw this title and immediately thought “hmmm, I wonder just how closely they decided to stick to the plot of An American Werewolf In London?”
How foolish I was.

The plot (and I use the word in the loosest sense) is all about a woman who is also a werewolf, getting all furry and fanged when she’s having an orgasm. When she wanders into a lesbian sex bar to ask if she can call a cab (as you do)  she proceeds to have lesbian sex with a girl who has just finished having lesbian sex with her partner. At the height of these sexy proceedings the werewolf lady gets all wolfy and bites the girl, who then has to go to hospital. Werewolf lady keeps tracking other women to have sex with and bite while victim number one wakes up in hospital and finds herself being turned all furry and fanged during a heated bout of lesbian sex. Meanwhile, a female journalist from “The Limey” newspaper interviews the werewolf lady before going out of her way to help the first victim.

You’ll notice from the brief, and lazy (I just don’t have the energy to waste on this trash), description above that lesbian sex features a lot in this film. That is, in fact, all that the movie has going for it, if you’re into that kinda thing. I’m not. In fact, I’ll astonish many a red-blooded male by saying that I was thoroughly bored after the first 5 minutes.

William Hellfire (hmmm, I am thinking that he’s using a fake name there) claims to have wrote and directed the thing though I’m amazed that anyone would put their name to this dross. The script is, of course, laughable but people don’t watch this kind of thing for ear-tickling dialogue. It’s all about the sex scenes, which are repetitive and laughable, especially when women are supposedly turning into werewolves in the heat of passion. I’m not even sure if this thing qualifies as a feature, coming in at just under 70 minutes in length, and that’s padded out by ridiculously edited insert shots and annoying, random images.

Oh, and in case you’re in any doubt, there is nothing here except the title that gives a passing nod to the classic John Landis movie. The final rating is raise slightly for the benefit of those who seek out this film for its simple aesthetic highlights.
.
3/10

Posted by Tylerandjack at 13:07 No comments:

A decent, if unspectacular, comedy that ends up feeling like some extended episode of “Undeclared” thanks to the cast of fresh faces and the number of quirky characters, Fifty Pills tries hard to be likeable and just manages it.
Lou Taylor Pucci is Darren, a young man who has just lost his college scholarship thanks to a party that was thrown by his roommate (drug-dealing Coleman, played by John Hensley). This is despite the fact that Darren wasn’t even there at the time. He is given a little bit of time by a sympathetic housing manager and Coleman gives him fifty pills, hence the title, that he should be able to sell at $20 each to earn the money he desperately needs to be able to stay on in college. And so Darren sets off on a quest to sell the pills, make the money and keep his life on track.
Director Theo Avgerinos and writer Matthews Perniciaro seem to be aiming for a hip, fun vibe but don’t get enough in the mix to make Fifty Pills anything more than a passable attempt to belatedly rife the coat-tails of Go. The script isn’t all that sharp and the direction isn’t all that stylish but, thankfully, the cast and characters do a lot to raise the whole thing up to a rating of just-above-average.
Pucci is okay, if a bit bland, in the main role, Hensley is as good as he so often is and the potential love interest comes in the form of a young Kristen Bell. Nora Zehetner is fun for her limited time onscreen, Eddie Kaye Thomas is hilarious, Michael Pena provides a few laughs and Monica Keena gets to have a lot of fun. The gorgeous Diora Baird is onscreen for less than a minute (sigh) and we get a few moments of magnificent scene-stealing from Jane Lynch and John Kapelos as Darren’s parents.
It moves along briskly enough and tries hard to please but Fifty Pills is certainly not a movie that would be deemed unmissable. It is, however, worth 90 minutes of your time if it comes on and you have nothing else scheduled.
6/10.

Posted by Tylerandjack at 12:58 No comments:

There are many reasons why I love the insane, and insanely entertaining, Killer Tongue. Melinda Clarke being in the lead role is the main one but none of the other reasons really make much sense. It’s just a matter of personal taste (no pun intended).
Melinda Clarke plays Candy, a loving woman who we see pulling off a successful robbery with her beau, Johnny (Jason Durr). Unfortunately, Johnny is then caught and has to do some hard time in the company of people like Wig (Doug Bradley) and under the ever-watchful eye of the sadistic prison director (Robert Englund). Candy goes into hiding in a nun but when the time comes to move on she’s out of there quick-sharp. Taking her three dogs along, she leaves just in time – a newspaper photo reveals her location to the two men she and Johnny ripped off in the aftermath of their big score. While she waits for Johnny, Candy makes soup for her and the dogs and, wouldn’t you just know it, a killer tongue from outer space lands in the soup and gets into her body, transforming her into a black-haired vixen with an appetite for . . . . . . . . . more than soup. And her dogs are transformed into three camp young men (including one Jonathan Rhys Meyers). Johnny is trying to get to Candy, upset criminals are trying to get to Candy, a determined nun is trying to get to Candy but Candy is probably best left alone while she struggles with her new, lively tongue.
Yes, you read the above paragraph correctly. Killer Tongue IS that insane. It’s also got some laughs here and there, a few blood-spattered moments and a layer of eroticism as Candy grapples with the tongue.
Writer-director Alberto Sciamma is clearly a little bit bonkers, but the good kind of bonkers. He elicits over the top performances from most of the actors onscreen (Nigel Whitmey, as Chip, gets arguably the best moment with one explosive fit of anger revolving around clothing) and fills the screen with equal parts colour and grime. Clarke is a good sport in the lead role, and as gorgeous as ever, and the other big presence in the movie is Robert Englund, brilliantly portraying a character who is all sleaze and nastiness.
Top things off with a cheesy, bouncy soundtrack and a couple of amusing conversations between a woman and an alien tongue and you have something that’s certainly not for everyone but that should be enjoyed by more warped individuals. Like myself.
7/10.

Steven Seagal stretches himself yet again as a tough, New York cop out to kick ass to avenge the death of his colleague in this bloody, brutal action thriller that benefits immensely from a smattering of familiar faces in the supporting cast and pacing that never lets things slow down for too long.
Seagal plays Gino Felino (no, that really is the name that they’ve given him), a man who gets very, very upset when his partner is gunned down in the street in broad daylight by drug-addled and power-hungry maniac Richie Madano. Gino will do whatever it takes to get to Richie, even if it means upsetting the gangsters that he’s always maintained cordial relations with, arresting Richie’s family members and generally busting up shady areas that he knows Richie has been known to frequent. As Gino gets closer to Richie, the risks get higher and higher.
Director John Flynn has produced a few decent movies during his career and this is one of them, as long as you’re a fan of Seagal’s fighting style. David Lee Henry’s script isn’t bad either, managing to balance a little mystery and a little soul-searching for our leading man in between the nose-breaking and ass-kicking.
Seagal is, as ever, as appealing or unappealing as you’ve already decided to find him. He knows his target audience and delivers accordingly. Thankfully, he’s surrounded by some great acting this time from the likes of Jerry Orbach, Dominic Chianese (probably best known nowadays to people as “Junior” from The Sopranos) and a magnificent William Forsythe being . . . . . . . . . . . . . . . . . . . . . magnificent in the role of Richie Madano. The ladies onscreen include Gina Gershon, Julianne Margulies and Shannon Whirry in a small role.
The action scenes are enjoyable, a mix of style and harsh straightforward moves that are Seagal’s trademark. Out For Justice would, arguably, be the last Seagal film to really have that slight edge, that coating of old-school revenge thriller over the martial arts polish, and it’s all the better for it, boasting a finale as satisfying as it is bone-crunchingly painful.
7/10.

Posted by Tylerandjack at 22:30 No comments: