Okay, let me be clear on one thing here, right from the start. Adam Sandler is very probably far too busy enjoying his millions and millions of dollars to worry about how the general public, or perhaps just those who are more vocal online, have decided to loathe him. So to think that he needs, or even wants, any defence is pretty ridiculous. Despite some people now labelling him as one of the very worst things about modern mainstream cinema. This small article is just my own way of letting off some steam and hashing out some thoughts. Yes, it's like almost every other article/review on this blog.

Adam Sandler is, at the time of me writing this post, 49 years old. And he's been trying to make audiences laugh with his onscreen antics for just over 2/3 of his laugh. Despite appearing in a variety of movies  - such as Going Overboard, Mixed Nuts, Airheads and Billy Madison - and the American institution that is SNL, Sandler REALLY managed to strike gold with Happy Gilmore, a golf-centric comedy that used his angry manchild schtick to great effect. This was the film that, as far as I can tell, started to get him known internationally. The next film didn't do much for his profile, although Bulletproof is a fun action comedy, but it was only a couple of years later that The Wedding Singer paired Sandler up with the adorable Drew Barrymore, an onscreen pairing that would eventually lead to us also receiving 50 First Dates and Blended (for better or for worse).

But outwith that somewhat winning romcom formula, Sandler has spent his time mixing his projects up more than many could have ever expected. He has created an ensemble of friends that he likes to work with (as you can tell from watching the Grown Ups movies, That's My Boy, Pixels, Jack And Jill, I Now Pronounce You Chuck & Larry and many more), but he has also taken occasional dramatic turns (most notably subverting his comedic angry outbursts in the superb Punch-Drunk Love, although I also recommend checking out Spanglish) and has taken on strange, albeit high concept, fare such as Click and The Cobbler. Does any of this make up for the awfulness of Eight Crazy Nights? No, but I'll always have The Waterboy so it's all good. Oh, I'd better mention Just Go With It so that I can link to my review. And post this pic of Jennifer Aniston looking all kinds of way more gorgeous than Sandler.


UK folks can get their Sandler on here, with this enjoyable 6-pack.

American folks may not quite rush for this triple bill. 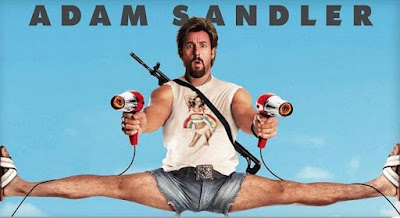 A few things happened over the past year or so that made me think about just how I, in contrast to some other fine folks, view Adam Sandler (and, believe me, I have actually seen most of his filmography - and I even find You Don't Mess With The Zohan hilarious . . . . . . because it is). The first major incident was when Rose McGowan brought a LOT of attention to a casting note that read as follows: "Please make sure to read the attached script before coming in so you understand the context of the scenes. Wardrobe note: Black (or dark) form-fitting tank that shows off cleavage (push-up bras encouraged). And formfitting leggings or jeans. Nothing white."
I don't work in Hollywood, or any part of the film industry, so I don't know if this is a common occurence. McGowan was highlighting the disparity between the genders and the constant differing standards placed on women who are all fighting for roles that can often be little more than eye candy. I ain't going to argue with that. All I will say is that a) Adam Sandler makes movies in which gorgeous women seem to have fallen in love with Adam Sandler, which should let you know what the role involves right there, and b) I think casting notes have sometimes specified what people should wear. I am not saying that either of these things SHOULD be, please bear that in mind. I am just saying that they are. Unless they actually aren't, and if that is the case then feel free to correct me, and pelt me with rotten veg, and so on and so forth.


The second main "Sandler scandal" occurred when about a dozen Native American actors walked off the set of The Ridiculous 6 due to their displeasure of certain aspects of the movie. As well as my not working in any part of the film industry, I am also not a Native American. So I can't say what feelings would well up in me if I saw the bad, broad jokes peppering the script of The Ridiculous 6. All I can say is that, when I finally saw it, I didn't think it was as bad as many people were expecting it to be. Oh, it had a certain air of awfulness. But I never felt that Native Americans were actually the butt of any of the jokes (beyond some juvenile character names). Of course, I can say that from a privileged position. But I have often said that I have never been offended by my own race (the Scots) being depicted in broad strokes for comedic effect. Scrooge McDuck, Braveheart and Begbie don't exactly give us a broad range of idols. And that's after the years spent washing my brain out after realising that The Krankies were actually husband and wife.


The above incident allowed people to further bemoan Sandler and loudly announce that the deal he made with Netflix would result in a selection of movies they would never watch if their lives depended on it. And, really, it's that strange palpable loathing of Sandler that got me thinking. Why DO people now seem to hate him?

Yes, he's been reworking his style for a number of years now. The law of diminishing returns comes into effect when you take so many trips back to the same well, but the exact same criticism could be levelled at Bill Murray, Ben Stiller, Arnold Schwarzenegger, Robert Downey Jr, Steven Seagal, Quentin Tarantino. I like all of those people. Well, apart from Seagal (and even he managed to give us some good stuff before he got too lazy to even hire convincing stunt doubles).

He works with the same people again and again, and a number of his movies feel like they were just made as an excuse for everyone to have fun and maybe have a paid holiday. Yep, and if only every movie star was so lucky. The same thing could be said about Burt Reynolds, at his peak, Steven Soderbergh, numerous Samuel L. Jackson movies (doesn't he make movies depending on where he wants to play golf, or am I misremembering?), Brett Ratner, etc.

His movies are offensive. Well, you know, comedy sometimes offends. Particularly when people seem to be on the prowl for something to be offended by. If you're offended by the very fact that Sandler still gets big bucks for his comedy then that's something I can understand. I don't agree, but I understand it. If you're offended by the content of his movies then I just don't get it. Oh, I am sure there ARE some offensive gags, especially considering the level of humour that Sandler and co. always seem to aim for, but I do think that there's an even quality to his movies that just sets up everyone to be the butt of at least one broad gag.

Ah, maybe I should actually try to make a point here. If there is even a point to be made. Remember way back in that first paragraph when I mentioned that some people now cite Sandler as someone they can hold up as the worst of mainstream cinema? Or, at the very least, he's often thrown into conversations now as a figure who can be held up to represent all that cinephiles hate.
I absolutely understand why Sandler isn't for everyone. He specialises in marketing dumb, and that usually ends up with films that are either smart and hilarious or just, funnily enough, dumb. When he fails then his films end up in the latter category. And many would say that he fails with every new addition to his filmography, certainly more often than he succeeds. But viewing him as the evil one who will herald the end of decent comedy movies as we know them is akin to calling Michael Bay the man who killed action cinema. Neither claim is true. Neither claim is remotely close to being true. And sometimes such hyperbole will spur me to write something. Even if I could have used this time to enjoy a rewatch of Hotel Transylvania.

One last thing. I tend not to let personal morals affect my movie viewing choices. That allows me to watch Polanski movies, Chaplin flicks, and many more films that would otherwise be off the table if I only watched films by, or involving, people who were all upstanding members of their communities. I would just add, however, as the final exhibit in this rambling, unnecessary, even unwanted, defence of Sandler that I have never heard or seen anything about his offscreen personality that makes him seem like anything other than a down to earth, sweet, caring guy who loves his family, loves his friends, and loves being allowed to be silly for a career.

Which is where I can end this post, as I am sure anyone who read this far will be grateful to see.

Oh, and I'll always love this


Posted by Tylerandjack at 20:00 No comments: