Okay. This. This was a film. The sixth entry in the Puppet Master series doesn't really feel like a Puppet Master movie. Instead, it feels like one of those low-budget films trying to cash in on something more successful, which is very odd. Think of how Dolly Dearest compares to Child's Play and you'll get the idea (oh, and for those who have not seen it in years, it does NOT hold up well). A bit of research once the end credits rolled shows that the film also borrowed quite liberally from a 1973 movie named Sssssss, which means I will have to check that out one day. It also helps to explain why this feels less like a film belonging to this series than any of the other instalments I have viewed so far.

The plot this time around concerns a Dr. Magrew (George Peck), the owner of a doll museum known as The House Of Marvels. On a jaunt with his daughter (Jane, played by Emily Harrison), just home from college, the two meet a mild-mannered young man named Robert (Josh Green) who works at a small gas station. Robert also carves small wooden creations that impress both of the Magrews, prompting a job offer. Once back at The House Of Marvels, Robert is shown the living puppets that viewers are already familiar with, and Dr. Magrew admits that he is looking for help in crafting his own new creation. So it looks like everyone could help each other out, much to the chagrin of a local bully (Joey, played by Michael D. Guerin) who seems quite bitter and jealous.

It's David DeCoteau back in the director's chair, credited as Victoria Sloan, but this is one of the many movies that he can seem to do nowadays for the producer-pleasing combination of quick and cheap. Hey, he's made a huge number of films, and kept a whole lot of people in employment, so it works more than it doesn't, but it feels like a further step down for this series after the previous couple of movies.

The script, by Neal Marshall Stevens (credited as Benjamin Carr), is . . . well, it's actually not TOO bad. There aren't any surprises, despite Stevens maybe thinking otherwise, and the broad characters are given the sort of dialogue that feels like it came out of a book entitled "cheap genre screenwriting 101", but it does everything required, sows a couple of good ideas, and at least tries out this particular diversion without really messing up the established history preceding it.

The performances are, to be as nice as possible, pretty much exactly as you'd expect. Peck is quite good fun as Magrew, Harrison is quite sweet as his daughter, and Green does better when he gets to move forward from early scenes that have him perilously close to just being "Simple Jack". Guerin is an irredeemable baddie, which makes things all the more enjoyable when he is finally shown the supernatural power of the puppets.

It's bad, yet it's not awful. There just isn't enough good stuff in the first half, one or two nightmare sequences aside. That wouldn't be a problem in the finale made up for it. It doesn't. In fact, once it became obvious where things were heading (which you should be able to spot quite early on) it then becomes a waiting game to see how well it's all depicted, leading to disappointment when you see that it's not depicted half as well as it could have been. 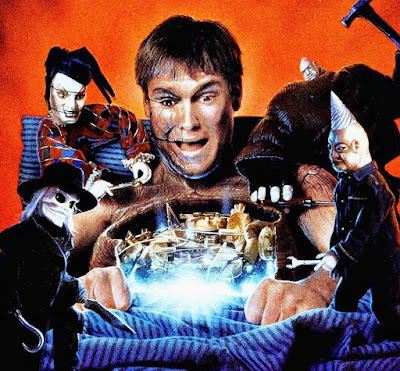