Written by Grady Hendrix (arguably best known for his outstanding work on the wonderful Paperbacks From Hell book), Satanic Panic is the feature directorial debut from Chelsea Stardust, after a number of years directing shorts, as well as a number of various roles in the movie industry. All I can say is that I hope she is already developing her next feature, because this is an absolutely brilliant bit of entertainment, happy to take a diversion or two into some very wild territory indeed.

Hayley Griffith stars as Sam, a young woman at the start of her career as a pizza delivery driver. That start is not looking too promising. She doesn't get any tips, she ends up roped into helping customers with small tasks that shouldn't be any of her concern, and then, worst of all, she ends up the potential virgin sacrifice at the heart of a ritual being led by a ruthless and powerful coven leader (Danica Ross, played by Rebecca Romijn). Can she survive the night? And will anyone actually give her a decent tip?

With a script full of great lines of dialogue, in the form of both venomous one-line insults and amusing exchanges between characters, and a fantastic brisk pace from start to finish, Satanic Panic is a film full of easy pleasures, and a lot of laughs. Thankfully, and to the relief of many horror fans, it also delivers on the satanic part of the title. Although not ever really scary, it's nice to see something put together that feels as if equal care has been given to the moments of horror and gore in between the many chuckles. At least one set-piece has an impressive commitment to what is being shown that should make viewers squirm and wince, and the infrequent gore gags are expertly realised to show plenty of blood flowing without churning any stomachs.

It also helps that the casting here is practically perfect. Although Griffith is very likable in the lead role, and is given a great co-star to work with in the shape of Ruby Modine (who plays a young woman who was the original potential sacrifice), there is an impressively large shadow cast over the proceedings by Romijn, giving the best performance I have seen from her as a leader who has to balance the black arts with social standing, rivalries, and her own family. Arden Myrin is also a lot of fun, the number two who may hope to one day be number one, and there are great supporting turns from the likes of AJ Bowen, Jordan Ladd, Jeff Daniel Phillips, Jerry O'Connell, and others.

Although it can feel like 90% of horror film festival highlights (and I first heard about this after it was received very well at a number of festivals) are horror comedies, Satanic Panic also deserves some extra brownie points for not being another of the seemingly unending comedic riffs on slasher or zombie movies. I also enjoy many of those, don't get me wrong, but it's always good to see something willing to take a path less traveled. 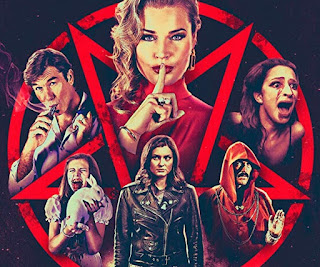